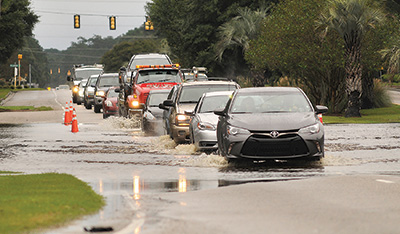 A federal grant will allow Georgetown County to improve drainage across Highway 17 in Litchfield, an area that was under water during a storm in 2015 that was called the “1,000-year flood.”

The county will increase the size of pipes that run under the highway from a pond adjacent to Litchfield Market Village to Midway Creek at Litchfield by the Sea.

It is part of a package of improvements the county plans in the area.

The $939,529 that the county will receive is part of $157.6 million in disaster mitigation funds the state got under a bill passed by Congress in 2018.

The state earmarked $100 million for infrastructure and this year approved $30.1 million for 11 projects in counties most impacted by the 2015 storm and Hurricane Matthew the following year.

The funds arrive at a time when Georgetown County is working to complete a list of about 40 stormwater projects, and consultants are preparing a stormwater master plan for the Waccamaw Neck.

That led him to the Waccamaw Regional Council of Governments, which administers the community development block grant program. To qualify, the county had to find projects that came with an economic benefit.

“It has a significant economic impact on the community if that road shuts down,” Funnye said. “It’s impacted if we have a large, torrential rainfall.”

The pond, which is part of the Mingo development at Willbrook, won’t be altered, but increasing the flow of water under the highway could have an impact on drainage upstream, Funnye said.

As part of the grant for the Mingo Pond project, the state Office of Disaster Recovery required the county to accept responsibility for the long-term maintenance of the improvements.

The county has plans for several drainage improvements in the Litchfield area. It completed a project a few years ago that fixed the flood controls at Osprey Lake in Litchfield by the Sea that allow stormwater to flow into Midway Creek.

“That was designed to accommodate the other projects,” Funnye said.

Later this year, the county expects to start work on a project that will replace drainage pipes under Boyle Drive in North Litchfield that carry water from Flagg Pond south toward the creek.

Property owners at North Litchfield want the county to address a “floating island” in Flagg Pond that was dislodged by Hurricane Dorian in 2019 and came to rest near Boyle Drive.

The group asked the county to remove the vegetation, but the pond is privately owned, and that work is not part of its drainage plans.

Other county projects include improving drainage along Sandy Island Road, where stormwater also flows under Highway 17 toward North Litchfield.

The state Department of Transportation made repairs to drainage under the highway at Litchfield Drive, but Funnye said those were only temporary. The county wants to expand on those.