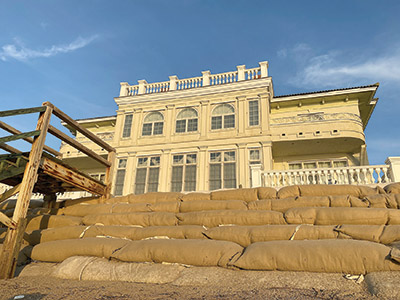 Sandbags at one of the four houses whose owners are funding a research project in order to keep the bags in place.

A conservation group has appealed the state’s decision to allow buried sandbags to remain in front of four oceanfront houses as part of a university study. The Coastal Conservation League filed notice this week that it will also challenge the decision in federal court as a violation of the Endangered Species Act.

The board of the Department of Health and Environmental Control voted 3-2 in January to overturn a staff decision denying a request to allow the sandbags to remain so they could be part of a study by Paul Gayes, a professor of marine science at Coastal Carolina University.

Gayes was asked to conduct the study by the owners of four beach houses so they could claim an exemption from the state’s Beachfront Management Act, which only allows sandbags for temporary erosion control.

Staff at DHEC’s Office of Ocean and Coastal Resource Management said that in addition to violating the law, the sandbags would pose a threat to nesting sea turtles.

Attorneys for the property owners said sea turtles can’t nest in the area because of erosion that has exposed the seawall. DeBordieu is currently at work on a beach renourishment project that will cover the seawall with offshore sand. It will also cover the sandbags.

In addition to challenging the DHEC board’s decision as “contrary to the plain letter of the law,” the Coastal Conservation League said the agency, the property owners and Gayes are violating the Endangered Species Act by failing to get a federal permit to disturb the sea turtles.

The group asked the U.S. Department of Commerce and the Department of the Interior to enforce the act or it will take action in federal court.

In allowing the sandbags to remain and be covered, the DHEC board said it relied on the applicants’ claims that “the proposed research activity will have no negative effect on coastal flora or fauna, including no harmful impact on sea turtles.”

The board also said the applicants were responsible for getting federal permits.

The appeal of the DHEC board’s decision was filed in the state Administrative Law Court by Leslie Lehnhart, an attorney with the S.C. Environmental Law Project.

In her filing, Lenhardt said the board’s decision was made without evidence that the work would not harm sea turtles. She noted that state and federal wildlife agencies had acutually  raised concerns.

By approving the exemption, the owners “get rewarded for ignoring the laws,” Lenhardt said.