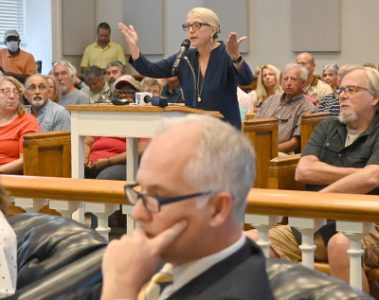 Cindy Person argues that the comprehensive plan needs to be followed at a hearing over plans for townhouses in Parkersville.

Four community groups have called on Georgetown County to halt any decisions on development until it brings its zoning ordinance into compliance with its comprehensive plan. They are willing to go to court “in the event that the county is not willing to engage in a good faith discussion,” according to a letter sent last week to the County Council Chairman Louis Morant  and Elizabeth Krauss, who chairs the Planning Commission.

The groups said they wanted a reply by the end of this week. County officials did not respond to a request for comment by press time.

The letter from Cindy Person, attorney for Keep It Green Advocacy, follows public hearings last month over two townhouse developments in the Parkersville community at Pawleys Island. The commission is due to hold a hearing next week on a request by the county Economic Development Alliance to allow construction of 90 townhouses on another tract in the area that is currently zoned for a technology park.

Person represents Keep It Green, Preserve Murrells Inlet, the Pawleys Island Civic Club and the Parkersville Planning and Development Alliance, a group created last month that has the Rev. Johnny Ford as its president. She argued at last month’s Planning Commission hearings that the townhouse plans should be rejected because they call for high density development on property that is shown in the comprehensive plan as medium density.  (The county defines medium density as 2.1 to 5 units per acre and high density as 5.1 to 16 units.) But the property is zoned “general residential,” which allows the higher density.

Until those things are done, the county should “defer any zoning or land development decisions,” Person said.

“There are many zoning ordinances in the Waccamaw Neck that are in direct conflict with the comprehensive land use plan and future land use maps,” Person said in her letter.

Land use is one of 10 elements of the comprehensive plan, which local governments are required by state law to adopt and then revise every 10 years. The current land-use element was approved in 2007 and reviewed in 2014. The county began its revision before the pandemic, but the process stalled over questions of public input.

Person said this week that she isn’t sure how many parcels would need to be rezoned to bring them into compliance with the maps in the current land-use element.

“I have a general road map,” she said, but she added that she needs additional information from the county before she can say how long the process would take.

“A lot of the stuff that’s in the minority communities is most critical. That’s all that’s left, quite frankly,” Person said.

In her letter, she told the county that the impact of the mismatch between future land use goals and the zoning currently in place will be greatest in traditionally Black neighborhoods.

“Not only are conflicting zoning ordinances more prevalent in minority communities, there appears to be a pattern of approval of projects that conflict with the comprehensive plan or otherwise allow undesirable commercial or other encroachments,” she wrote.

The groups understand that the county planning department is “overworked and understaffed,” but said that their offers of volunteer help were either rejected  or ignored. “We have encountered deeply-rooted resistance at the decision making levels of our county government,” Person wrote.

Keep It Green and a group of residents in The Colony sued the county earlier this year after the council voted to rezone 14.8 acres south of Pawleys Island to allow 10,000-square-foot lots rather than half-acre lots. That suit is still pending.