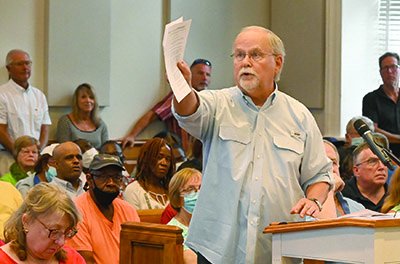 Gary Weinreich outlines flaws in the development plans at the public hearing.

Problems at a multi-family development in Murrells Inlet show that Georgetown County is unable to manage high-density projects, according to two citizens groups.

The findings from a review of work at Sunnyside Village were cited in last week’s 3-2 decisions by the Georgetown County Planning Commission to recommend the county withhold site plan approval from two proposed townhouse developments in the Parkersville community at Pawleys Island.

“None of them can be done and comply with the ordinance,” said commission member Sandra Bundy, who made the motion to recommend denial of both plans.

The projects call for 56 three-bedroom townhouses on 7.9 acres on Parkersville Road and 53 of those townhouses on 6.9 acres on Petigru Drive. The property is owned by members of the Nesbit family, who have a contract to sell it to Laine Commercial Real Estate of Mount Pleasant.

The projects came before the commission for site plan review. The property is already zoned “general residential,” which allows townhouses. Since 2011, the county has required that multi-family projects with 10 units or more be reviewed by the commission for compliance with county regulations and receive approval from County Council.

Gary Weinreich, an environmental engineer for 40 years, told the commission that an audit of the Murrells Inlet project – which received the same

“Regulations are ignored,” Weinreich said. “Not a single tree on that site had a protection that complies with the county tree ordinance.”

He told the commission Sunnyside Village is typical of other projects in the county.

“It’s very important that you be aware as you look at further high-density projects that are on the agenda tonight. You should approve no additional high-density projects until our county administrator and her staff have addressed and fully resolved all 21 violations that we noted,” Weinreich said.

The commission’s review followed its reconsideration of a 51-lot subdivision west of Georgetown that it denied in July. The process is similar to the multi-family project review except that the commission has the final vote.

County Attorney Jay Watson told the commission that they have to state their reasons for denial, which wasn’t done. “You are looking for whether the plan meets requirements,” Watson said.

Area residents spoke against the development, saying it will exacerbate traffic and drainage problems. Clint Richardson, the project manager for Beverly Homes, said the project will comply with the county regulations and pointed out that the zoning allows the project.

Commission member Marla Hamby asked Watson what could happen if approval was denied.

“I’m not going to speculate on that,” Watson said. “The question before the Planning Commission is: Does it conform to the requirements of the ordinance?”

The same criteria applied to the townhouse projects. “A zoning change is not being requested,” said Holly Richardson, the county planning director.

Sixteen people spoke against both projects, citing concerns about traffic, stormwater and the changing character of a traditionally African-American neighborhood.

Weinreich also challenged the details of the plan for the Petigru site. “You couldn’t fit a worse design on this property,” he said.

Cindy Person, attorney for Keep It Green Advocacy, argued that the commission should follow the future land-use maps in the county’s comprehensive plan that show the property as “medium density” rather than approve the higher density allowed by the zoning ordinance. That would limit the projects to no more than five units an acre rather than the 9.8 and 8.6 units proposed.

Robert Wilfong, engineer for both projects, said they comply with the regulations. Asked by Hamby about the location of trash bins and mailboxes, he said he would include those on future drawings.

He said he would do the same for tree canopies at Bundy’s  request.

“There is not enough space here for this project to be built and comply with the ordinance for stormwater and tree protection,” Bundy said.

Wilfong has asked County Council to defer its votes until Sept. 27.