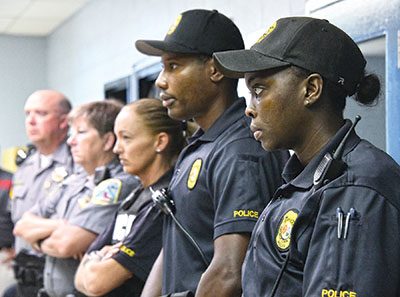 A loaded gun found in the possession of a student inside a high school last month has school officials examining district safety measures and may lead to a clear bag policy.

On Oct. 22, three Georgetown High School students, two 17-year-olds and one 15-year-old, were arrested after two made threats on a bus and one was found with a gun at school.

More than 20 parents of Georgetown High students attended Tuesday’s board of education meeting to hear from Alan Walters, the district’s executive director for safety and risk management, and Superintendent Randy Dozier.

The threat was discovered by Lonnie Stuckey, the district’s director for safety and risk management, who was investigating a different incident. Stuckey watched a video from a bus camera and heard the juveniles making threats. He then asked an investigator from the Georgetown County Sheriff’s Office to get involved.

None of the students who were on the bus reported the incident.

“If you see something say something,” Walters said. “Still, that’s where we struggle.”

Dozier said the district is forming safety teams at schools, and extending the hours of crossing guards, who will be asked to patrol school grounds before and after their shifts. District staff have also been hanging out on campuses before and after school and during lunch.

“Clearly we’re not going to wait to see what happens,” Dozier said.

Many parents have urged the district to install and use metals detectors at school entrances every day.

Walters said metal detectors would not have prevented the GHS incident, that the gun got into the school another way. He said more charges may be forthcoming.

Another factor is that metal detectors are only used on people entering the building. Backpacks and purses have to be searched by hand.

To search all the students coming into a high school the size of Georgetown would take 32 people each day, Walters said.

Walters suggested the district could hire a private security firm to man the metal detectors. Using volunteers, like parents, is not an option because the district’s insurance company wouldn’t allow it.

Walters investigated how other school districts in the state handle the question of metal detectors and found a wide range of policies.

“This is something everybody is struggling with,” he added.

Dozier said it was time for the district to adopt a clear bag policy and he hoped to have it in place early next year.

Walters said people who go to sporting events in other counties like Horry, or at colleges, are used to carrying clear bags. He suggested booster clubs could slap logos on clear bags and sell them as a fundraiser.