The tattered ends of the gray plastic tarp flutter in the sultry air. The tarp covers the back half of the roof at Wilson Dozier’s house in Georgetown. Where the tarp ends, the siding has rotted under the peeling yellow paint.

The house is a decade older than its owner. It won’t be here much longer. At age 80, Dozier will get a new house this fall, the first under a Habitat Cottage program being launched by the Georgetown County chapter of Habitat for Humanity.

“It’s definitely an unmet need in the area. You just have to drive around to see the housing conditions that some of our seniors are living in,” said Laura Gassler, the chapter’s executive director.

This year marks the 30th anniversary of Habitat for Humanity in Georgetown County. It has built 112 homes for low-income residents who pay for the homes with sweat equity as well as a mortgage.

“Habitat is a hand up, not a hand out,” Gassler said. “Our homeowners work very hard for this.” 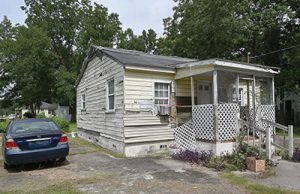 Last year, Habitat added a repair program for low-income residents. Dozier was one of the applicants. Volunteers realized that he needed more than repair work. There are three window air conditioners in the 650-square-foot house. “I’m pretty sure they don’t work,” Gassler said. “When it rains, he has to leave the house because the water comes down the inside wall.”

Volunteers found other seniors in the same situation. So Habitat came up with the idea of building smaller, one-bedroom houses.

Gassler and Chris Garner, Habitat’s construction manager, started searching online for floor plans. The one that each had picked independent of the other was 675 square feet. It has a living area and kitchen, a bathroom and a bedroom. They got a designer to tweak the original to make the bedroom large enough for a hospital bed or a caregiver’s cot. They included a vaulted ceiling to increase the sense of space.

“The cost was not that much more to give it the quality we were looking for,” Gassler said.

It isn’t a tiny house, which is typically a few hundred square feet. They decided to call it the Habitat Cottage.

This summer, Garner assembled the wall panels in the workshop at the Habitat office in Georgetown. The space is big enough that he could assemble the entire cottage. He used blue painter’s tape to mark the cabinets, bath fixtures and the bed. He moved through the cottage with a cardboard circle whose 5-foot diameter equals the turning radius of a wheelchair.

The cottage will have an energy-efficient hybrid water heater that draws heat from the air. Two mini-split heat pumps will provide heating and cooling. Built-in lights will use LED bulbs.

There will be backing boards inside the walls to allow installation of hand rails and grab bars in the future.

“Since the houses are for seniors that will eventually get older, we wanted some place where they can age in place and not have to leave,” Gassler said.

And because they are seniors, the financing is different from that of traditional Habitat families. Those usually earn between 50 to 80 percent of the county’s annual median income of $47,578 a year. The cottage residents will fall in the 30 to 50 percent range.

At 30 percent, the household income would be under $1,200 a month. The goal for affordable housing is that it cost no more than 30 percent of that income. So Habitat’s goal is a $300 monthly mortgage payment, which would include taxes and insurance.

“We hold our own mortgages, so we have some leeway and some options,” Gassler said. Those are zero-interest mortgages.

Garner estimated the cost of the cottage at $65,000. That was based on current material costs, which he said are starting to fall from pandemic-driven peaks.

Habitat will be able to secure federal grants for most of that. The local contribution will be about $15,000.

The Dozier cottage is being funded with a $41,000 gift from a long-time Habitat volunteer, Forrest Meiere, said Christine Cribb, the Habitat development director. Dozier and Meiere recently met. “They hit it off right away,” Cribb said. Meiere told her he plans to help work on the project, too.

Work on the Dozier cottage is scheduled to start later this month. His existing house will be demolished and the new one built on a slab.

The plan is to complete the project in three months, weather permitting.

“We’re wanting to have him in by the holidays,” Cribb said.