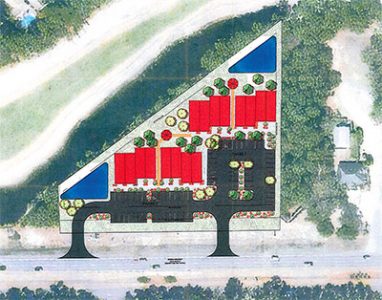 A conceptual plan for the proposed development.

A proposal to add 16 townhouses to a dormant commercial development along Highway 17 would be the first time that commercial property has been converted to residential use in Hagley Estates since the area was first developed in the 1960s.

The Planning Commission will hold a hearing today on a request to change the “planned development” zoning of the site to allow residential use.

“So far there has been no residential use of the commercial properties facing 17,” said Tom Stickler, president of the Hagley Estates Property Owners Association. “This would be the first time.”

The 2.5 acres is just north of the Quality Inn and faces the ninth hole of the Founders Club golf course. The site was approved as a commercial planned development in 2000 for Winyah Concrete. It allows up to 20,215 square feet of office space.

The property is owned by Darryl Price of Murrells Inlet, who bought the proerty through a partnership in 2006.

“The PD has received numerous extensions at the request of the owner,” Holly Richardson, the county planning director, noted in her report to the Planning Commission.

In 2010, the state Supreme Court ruled that planned developments, which are zoning districts with their own rules, must be a mix of residential and commercial uses.

“This project is being revised conceptually for the purpose of adding uses only in order to make this PUD comply with current state law to provide mixed uses (residential and commercial) and develop a marketable plan for the property,” according to the application for the Hagley property that was prepared by the Earthworks Group.

The existing plan calls for two office buildings. “The market’s not there in Pawleys Island,” said Steve Strickland, owner of Earthworks.

Instead, the proposed plan will create “live-work units.” They will be sold with an office or retail space on the ground floor and living space above, he said.

The citizens group Keep It Green opposes the change.

“There are all kinds of issues,” said Cindy Person, who chairs the group. “The bottom line for us is that it’s not zoned for high-density residential.”

Strickland said the buidings in the current and the proposed plan all meet the 90-foot setback.

“I was trying to do as minimal a change to the PD as possible,” he said.

Richardson’s report does not include a recommendation to the commission about approving the request, but does say that if the commission considers approval it should require compliance with the commercial design rules for the highway corridor and a tree and landscape plan before any work begins.

The commission meets at 5:30 p.m. in the Howard Auditorium in Georgetown.