‘He wasn’t going to live much longer’ – Coastal Observer

‘He wasn’t going to live much longer’ 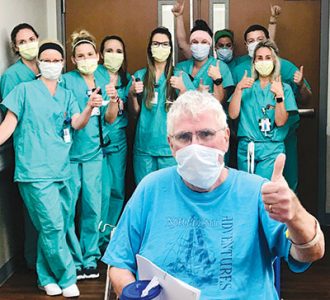 Two weeks after returning to their home at Prince Creek, Charles, 66, was in a coma fighting for his life after testing positive for COVID-19.

“Without my wife and God I would have never gotten through this,” Charles said. “There were lot of prayers involved with my getting well. There were prayer chains and a vigil outside the hospital. I’m sure that played a huge part in it.”

Diane also tested positive for COVID-19, but she never got sick enough to require hospitalization. She has a compromised immune system. The odds were she would be the sicker of the two.

“It doesn’t even make sense, this crazy virus,” Diane said.

The Costellos traveled to Europe with six other people, but each couple took a different flight on the last leg of the trip home on March 13. None of their friends have gotten sick.

“I’m pretty sure that’s where we caught it,” Diane said. “We weren’t really going anywhere when we got home to catch it.”

Charles went golfing on March 19 but was not feeling well when he got home.

“He was weak and he fell asleep at 4 in the afternoon,” Diane said. “I couldn’t wake him up to go to bed, and in the morning I found him on the floor.”

Charles was taken by ambulance to Waccamaw Community Hospital, where he was tested for COVID-19 and sent home.

“It didn’t necessitate him being admitted into the hospital,” said Dr. Desmond Young, a pulmonologist with Tidelands Health.

Three days later, when Tidelands notified the couple that Charles had tested positive, Diane was not surprised.

“He just got worse every day,” she said. 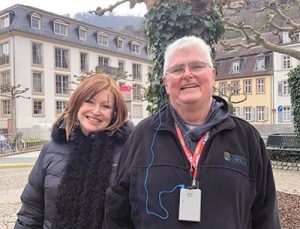 The Costellos in Europe in March.

On March 26, when Charles’ breathing got really bad, he was once again taken by ambulance to the hospital.

“He was very much more symptomatic,” Young said.

Hours later, Charles was put on a ventilator and in a medically-induced coma.

“It was very shortly after the second presentation. It went that fast,” Young said. “He wasn’t going to live much longer.”

“I knew they were going to do it, but I had no idea I’d be in a coma for nine days,” Charles said. “I don’t think they did either.”

Unable to be with him, Diane called and asked if she could FaceTime with him or if a nurse could put the phone up to his ear. Both requests were denied.

“Even though he was in a coma I just wanted him to hear my voice,” she said. “I thought, he’s going to die in the hospital alone and I’m going to die at home alone. It was traumatic.”

“We weren’t confident he was going to make it through it,” Young said.

Charles recovered well enough to be taken off the ventilator on April 4. He couldn’t believe the coma had lasted nine days.

“I was just happy to wake up,” Charles said. “I was weak. I couldn’t even get out of bed at that point.”

“When I got that phone call that they were taking him off the ventilator, I couldn’t believe it, how blessed we were,” Diane said. “And then when he called me the next day I was crying. It was unbelievable.”

“I couldn’t see her, but I could at least talk to her,” Charles said. “It was a big spirit lifter.”

Five days later, Charles was released from the hospital and returned home to a surprise: his neighbors came out of their houses to cheer as he passed.

“We couldn’t believe it, the golf carts, people standing outside of their houses and the balloons,” Diane said. “He felt like a hero. He was doing his parade wave out of the car.”

“It was quite a thing,” Charles said.

The neighbors had been watching out for Diane while Charles was in the hospital.

“I didn’t even know my neighbors because we just moved here in July,” Diane said. “They were amazing when they found out. Dropping food off and checking in on me twice a day.”

Someone even left toilet paper

“That’s my real hero,” Diane said. “So many people that we didn’t know were so wonderful.”

“They were taking good care of Diane while I was in the hospital,” Charles said. “We found out that we have terrific neighbors here.”

“It’s coming along pretty good. When I first got out I could barely walk. Now I’m moving around the house,” he said. “My strength is returning but I don’t quite have the stamina I need.”

Nobody knows whether the Costellos can reinfect each other.

“They don’t know if it’s possible or not,” Charles said. “So we just take precautions like everyone should.”

“I haven’t even given him a kiss,” Diane said. “We’re been sitting around the house in masks because we’re so scared.”

The Costellos moved to Murrells Inlet in 2012 from Philadelphia, where Charles was a bus driver. He worked part-time as a bus driver for Coastal Carolina University before giving the job up so he could golf and enjoy the couple’s “dream house” at Prince Creek.

They’ll celebrate their 40th wedding anniversary on May 17.

Dr. Desmond Young believes that the coronavirus pandemic of 2020 will be remembered in the same way as the assassination of President John F. Kennedy in 1963, the terrorist attacks of Sept. 11, 2001 and Hurricane Katrina in 2005.

“We’re going to look back when we’re older and say this is in the top five of all things that have shaped our society,” Young said.

But Young, a pulmonologist at Tidelands Health, thinks the pandemic will make us better.

“This is going to change the way that we think going forward,” he said. “The way we act as a society.”

Young has been treating coronavirus patients at Waccamaw Community Hospital.

“I have personally never seen anything like this locally and within the United States in my medical career,” he said. “Locally we’ve had a modest burden of intensive care needs for patients and hopefully it stays that way.”

Young has been a doctor for 20 years, the last 14 with Tidelands Health. He has treated 15 coronavirus patients in the last few weeks.

Tidelands has treated more than 75 people, both inpatients and outpatient, who have tested positive for COVID-19.

He said in some cases hospital staff have been exposed to the coronavirus after being “tricked” into thinking a patient is not sick because there are so many symptoms.

“Without testing it’s really hard to tell if the symptoms are related to the coronavirus,” he added.

Eighty out of 100 coronavirus patients are “mildly symptomatic” and don’t even need hospitalization, Young said.

Of the remaining 20 patients, one or two end up on life support. At least one-third of those who go on life support, Young said, never come off and some suffer multiple organ failure.

“It’s a very scary proposition for the patient,” Young said. “The longer they’re on life support the harder it is to get off life support.”

Some of the medications to treat the symptoms of the coronavirus also have dangerous side effects.

“It’s almost flipping a coin no matter what we do,” Young said. “You don’t see many things like this.”

There are currently no medications or treatments specifically designed to treat coronavirus, but there are many clinical trials going on to test different options.

Tidelands has been chosen to be part of a “convalescent” plasma study run by the Mayo Clinic. Blood is taken from patients who have recovered from the coronavirus and given to patients who are currently being treated for it.

Young praised the Tidelands nurses who are on the front lines of the pandemic.

“I have so much respect for these nurses,” he said. “They are putting their lives at risk [and] they do it with a smile on their face.”