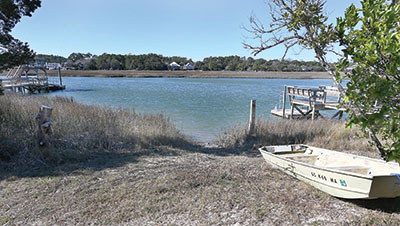 The Martin lot, left, on the north end of Myrtle Avenue is next to a mooring post used by Henry Thomas. They want to build a dock.

It’s a small part, just 5,335 square feet at the northern end of Myrtle Avenue. But it has caught the attention of the town because Martin has applied for a state permit to build a dock on Pawleys Creek.

“The town does not acknowledge that as a legitimate lot,” Administrator Ryan Fabbri said. “We didn’t even know it existed until it was recorded.”

The triangular lot was surveyed in October 2019 for Henry Thomas, who has a house on Atlantic Avenue and an easement that leads to the creek. The plat was filed with the Georgetown County register of deeds, noting that it was a resurvey of a lot of record and that it did not have a county tax map number.

In June 2020, Martin claimed ownership through a quit claim deed. He then conveyed his interest to himself and his wife, Beth.

At the same time, the Martins granted Thomas an easement across the property and agreed to share the cost of building a dock. It can be used by the families and their guests. The Martins live at Cedar Grove on the east side of Pawleys Creek.

The Martins applied this month for a permit from the state Office of Ocean and Coastal Resource Management to build a fixed and floating dock. The plan filed with the permit shows that the walkway would start in the right of way of Myrtle Avenue.

The agency denied permits in 2013 to Thomas and his neighbors, William and Katheryn Walter, for docks in the same area that also started in the road right of way.

“I’d be shocked if they approve it,” Fabbri said. Even if the state approved the dock permit, the town would have to issue a building permit, he added.

The town development ordinance requires that plats be approved by the chairman of the Planning Commission before they are recorded. Fabbri said he told county officials about that. He asked Town Attorney David DuRant to do a title search.

“I’m a little confused how it got this far,” Fabbri said.

Thomas said it started in 1924 when his family bought property on the north end of Pawleys Island that ran from the creek to the beach. The property was subdivided and the portion on Myrtle Avenue was sold, but the family retained an easement to get to the creek.

What Thomas has now is a post in the creek where a boat can be tied up. It was permitted by the Army Corps of Engineers, he said.

The marshfront property is shown on a 1938 plat of lots on the north end. It is between the creek and the Thomas lot.

“This is not a new property,” Thomas said. “This land belongs to the heirs of the property that was platted in 1938.”

A singer and songwriter in Nashville and New York, Martin grew up in Bishopville and Sumter. His grandfather, W.W. Pearce, was one of the three developers of the north end of Pawleys Island. “Pawleys Island was like a second home to me,” Martin said.

After his music career, Martin returned to Tennessee. But he came back to South Carolina when his first band, Second Nature, was inducted into the Beach Music Hall of Fame. It was there that he reconnected with Beth, who was the younger sister of one of his high school classmates. They had both lost their spouses. They married in 2017.

Martin said he now spends most of his time at Pawleys Island. He won the Best Musical award at the island’s Fourth of July parade in 2019, singing “South Carolina On My Mind,” one the state’s two official songs. He wrote the song in 1979.

Martin and Thomas met through a mutual friend.

“I found out I was heir to a little triangle of property,” Martin said. “We started looking into it.”

The triangle had never been sold.

After the quit claim deed was recorded, the Martins got a tax bill from Georgetown County. The property is valued at $50,000. The bill was $677.

“I’m not saying these people don’t own it,” Fabbri said. “You have to do it the right way.”

Martin said that’s what he did.

“We are not creating a lot,” he said.