Mayor makes plans for 2021 in wake of protest march 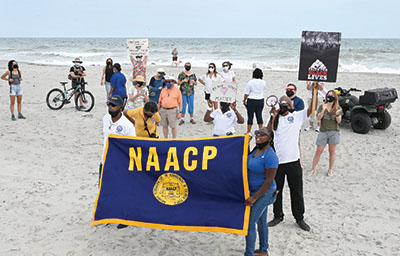 Protesters on the beach outside Sea View Inn call on Henry to resign.

Henry has been under pressure from the local chapter of the NAACP to resign since August over a social media post. The group held a protest march on the island over the weekend. It drew about 30 people, of whom 22 made the walk from the Publix grocery on Highway 17 to the beach in front of the Sea View Inn, which Henry owns.

Marvin Neal, the NAACP chapter president, said they would return. He repeated his call for Henry to step down.

But during discussion this week about whether the council members want to join the state health-care plan, Henry said he would decide next October.

“I plan to a.) serve until then, and I plan to run again in November 2021,” he said.
Henry’s post on Facebook linked the shooting death of two people at a traffic accident outside Georgetown to the social justice protests taking place in cities around the country. The victims were white. The man arrested for the shootings is Black. Henry said white people wouldn’t riot, “so why do we stand by and allow BLM to lawlessly destroy great American cities and threaten their citizens on a daily basis?”

Henry later apologized, saying he knew the victims’ families and was upset. He said he had no plans to resign.

The incident has not been discussed in a Town Council meeting, but this week the protest march drew questions about numbers and the cost.

“It was a lot less attended than was advertised,” Police Chief Mike Fanning said.

NAACP leaders talked of “dozens if not hundreds” of protesters when the march was announced.

“They were talking about bus loads of people, but they never showed,” Fanning said.

The town had its complete roster of four full-time and four part-time police officers on duty.

“This was additional cost to Pawleys Island for us to host this event,” Council Member Rocky Holliday said. He asked for a breakdown.

The march was the fourth time the NAACP chapter has rallied people to the island to protest Henry’s post, which it condemned as racist. Attendance has steadily declined.

The march began at Publix because the Nature Park next to Town Hall had been booked for a family Frisbee tournament, Administrator Ryan Fabbri said. There were no Frisbees in sight on Saturday afternoon as the protesters were escorted to the island along the North Causeway by Georgetown County sheriff’s deputies.

The marchers crossed over the First Street beach access and headed south, accompanied by Fanning and four officers.

A few scattered beachgoers mostly seemed to ignore the procession. A couple gave them thumbs-up.

At the Sea View Inn, which is Henry’s voting address, the leaders started up the steps only to be called back by Fanning. He told them that the inn was private property.

Neal said they had planned to cross to the street at the inn. Instead, they chanted. “Hey, hey, ho, ho, Brian Henry’s got to go.”

Two men who had provided security for a press conference by Henry in September stayed on the inn’s porch. An employee watched from an upstairs window. Police were also on Myrtle Avenue in front of the inn.

The march broke up and participants strolled back up the beach.

Henry this week thanked Fanning and his officers “for the professional way you guys handled the march. I appreciate the presence, the willingness to come in and just handle it the right way.”

Neal said the NAACP has a variety of options to keep the pressure on Henry. Last month, he talked about a legal challenge to the mayor’s use of the inn as his voting address. Henry also has a house on the west side of Pawleys Creek, although he gave up his residential property tax status when he moved his address to the island last year, according to county tax records.

The mayor and council members are unpaid positions. Joining the state health care plan “is one way we can at least derive some benefit from it,” Henry said at this week’s council meeting. “Next October, it will get a hard look from me.”

The state allows political subdivisions to join the health plan, but requires those entities to pay the same share for its members as the state does, Fabbri said. “That is non-negotiable,” he added.

Council Member Sarah Zimmerman said it would be unfair for the town to pay for council members’ insurance when Fabbri and Fanning took pay cuts this year to satisfy the council’s request to reduce costs.

“I’m saying take advantage of the plan,” Henry said, but not ask the town to pay for it. “Budget-neutral would be the goal.”

“I personally wouldn’t want the town to pay for my insurance,” Council Member Guerry Green said. “But if I could have state insurance, that would be great.”

The council agreed to let members sign up provided they reimburse the town for the premium payments.

And if the state objects, Green said, “you can always make a donation under a different label.”