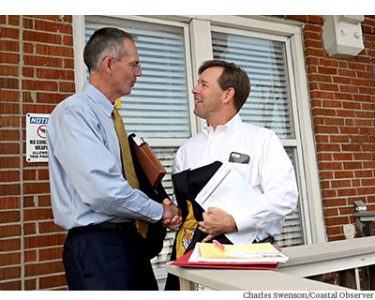 Butch Bowers, left, congratulates Brian Henry after the final results of the election were announced.

Brian Henry won’t be talking about the north, middle or south of Pawleys Island, where he is due to take office as mayor. Instead, he plans to look for ways to bring people together, “opportunities for residents to get together and focus on the issues,” he said.

Henry beat the first-term incumbent Jimmy Braswell 78-58 in last week’s Town Council election after 20 challenged ballots were counted following a hearing last week by the Georgetown County Board of Voter Registration and Elections.

Braswell and Josh Ricker, a council candidate, protested the election. The elections board dismissed the protest this week on procedural grounds.

Ricker said he has not decided whether he will appeal the elections board decision.

“I’m really disappointed in that commission,” he said, but added that he is gauging opinion on the island about and looking for the best option to clear up questions of voter residency. He has until Nov. 22 to decide on an appeal.

Henry did not attend the protest hearing. He said afterward that he put his faith in the motion to dismiss, filed by his attorney, Butch Bowers.

Henry said he was looking forward to talking with Braswell “and put this election behind us so we can start to heal the island.”

The mayor and council were due to be sworn in Monday, but the meeting was canceled after the election protest was filed. The council is now scheduled to meet Nov. 18.

“I don’t think there’s any issue that has divided us so much that we can’t get together,” Henry said.

The issue that emerged at the heart of the nonpartisan town elections was residency. Henry and his wife own the Sea View Inn and changed their voter registration from a house on the mainlend to the inn so Henry could run for mayor.

There were 42 new voters registered on the island before the cutoff for the Nov. 5 election, an increase of nearly a third. Braswell’s supporters challenged 29 of the 136 votes, including those of Henry and Council Member Guerry Green, who also has a house on the mainland.

“Brian Henry and Guerry Green are not legal residents of Pawleys Island and not qualified to serve,” Helen McFadden, attorney for Braswell and Ricker, told the elections board.

Under state law, a candidate must be a registered voter in the jurisdiction and only residents can be voters. The ballot challenges were based on the claim that the voters were not residents.

To vote, a person has to claim a domicile, defined as “fixed home where he has an intention of returning when he is absent.”

In most cases, it was the last-minute registration that raised concerns, Glenn Kornahrens, the poll watcher who challenged most of the ballots, said. That led him to review property, tax and business records. Those records showed Henry, Green and the others used other addresses off the island.

Board member Altman noted that there was no date on the property records to show if the information had changed along with voter’s residency. And even if it had not changed, he said, there is no requirement that a voter change all other residency information at the same time he changes his voter registration.

Voters swear an oath on the penalty of perjury that the information about residency on the voter registration is correct. “All we have to go on is the voter’s oath,” Altman said.

“We need to hear something really solid before we disenfranchise a voter,” Altman said. “We place great stock in the records we have.”

Dean Smith, the board chairman, said, “We take the right to vote very seriously.”

But Billy Jenkinson, who represented Braswell and Ricker at the ballot challenge hearing, said the board needed to look at criteria set out by state law that could determine the voter’s intent.

Jenkinson said they could not.

Green claims residency at a house that is also a vacation rental property.

“The evidence is people pay him $5,000 a week to live in that house. That ain’t his house,” Jenkinson said of Green.

“How much do you have to live in a house,” Altman asked.

“If you ignore the law, I guess you can say he lives there,” Jenkinson said.

The elections board, formally convened as the Board of Canvassers, voted 7-0 to uphold all the challenged votes.

Braswell and Ricker protested the election within hours, saying the board’s review of voter information was incomplete and saying Henry and Green were not qualified to vote.

Bowers argued that the protests sought to retry the issues from the challenged ballot hearing, but the law says the decision of the Board of Canvassers is final. “Last week you got it right,” he said. “I have never seen 100 percent of ballot challenges denied unanimously.”

“We have every right to protest that decision,” McFadden said. “It is final in the sense that it is ripe to be tested and contested.”

The board met for five minutes in executive session with the county attorney, Wesley Bryant, before granting the motion.

“This whole process has been something of a sham,” Braswell said. “Our legislators need to look at the residency laws.”