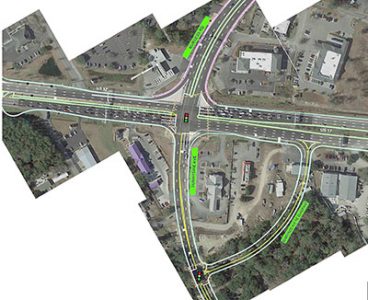 A loop road would eliminate left turns at Bypass 17 and Highway 707.

A state legislator is calling for more public comment on a $53.3 million list of improvements contained in a study of Highway 17 on the Waccamaw Neck.

Although the study was the subject of a virtual hearing this month that was supposed to complete a process that began in 2019, “in-person public hearings are better,” state Rep. Lee Hewitt said. “They can ask somebody and hear other comments. They’re not going to ask questions like they would in person.”

The study is an update of a 2003 document that outlined improvements that would delay the need to widen the highway from four to six lanes in order to accommodate the growing volume of traffic. One of those improvements was replacing the two-way left-turn lane on Highway 17 in the Pawleys Island business district with a raised median. That wasn’t completed until 2015 and drew opposition from business owners.

“I just want to make sure we don’t fall into that trap again,” Hewitt said.

The $100,000 update by the engineering firm AECOM was funded by the Grand Strand Area Transportation Study, an intergovernmental group that allocates federal funds to projects in the region.

Mark Hoeweler, executive director of GSATS, said the virtual hearing was the last item in its contract with AECOM.

“Anything’s possible, but I don’t see a path forward,” he said. “We waited as long as we could to do the best we could with that.”

The corridor study and a companion study of land use on Waccamaw Neck commissioned by Georgetown County started with public meetings in the fall of 2019. Those were curtailed by the coronavirus pandemic last year.

Hewitt, who serves on the GSATS policy committee, said he spoke with staff at the state Department of Transportation about additional public hearings.

“DOT thinks opinion has changed on ‘super street’ design,” he said, referring to a design concept that includes pedestrian  and public transportation needs along with the needs of vehicles.

Hewitt said he told the agency they might get a different response if they talked with people in person.

“Now that you’re getting people vaccinated and case counts are low, we can go out and let the people see the maps, see what they are proposing to change,” Hewitt said.

Georgetown County currently has the highest vaccination rate in the state, according to the Department of Health and Environmental Control. Over half the residents have had at least one dose.

The study lists $2.5 million worth of projects for completion between now and 2025. That include closing median cuts and recon figuring traffic signals.

Reworking the intersection of Bypass 17 and Highway 707 ($4.2 million) leads the list for projects from 2025 through 2035. It is followed by a project to install a raised median between the North Causeway and South Causeway intersections ($4.6 million) and a reconfiguration of the Litchfield Drive and Country Club Drive intersections ($2.4 million).

“The public needs to understand what’s being proposed,” Hewitt said.

He is particularly concerned that businesses be aware of the proposals. Many business owners don’t actually live in the area, he said.

State Sen. Stephen Goldfinch, who chairs the GSATS policy committee, said he has concerns about some of the proposals. At the top of the list is the change at Bypass 17 and Highway 707.

“The suggestion is some weird loop de loop,” he said. “The pavement’s literally just gotten dry” on a 2019 change to the intersection.

The AECOM study found that intersection will reach a failed level of service by next year. That means drivers will wait longer to get through the intersection.

“This loop de loop thing doesn’t do a whole lot more,” Goldfinch said. “Why don’t we fix this thing permanently and build an overpass?”

That would increase the cost of the project tenfold, Hoeweler said. In addition to construction costs, it would require obtaining more right of way.

He understood why Goldfinch was concerned.

“That wasn’t something that was on my radar,” he said of the impending failure. “We were hoping that the intersection widening would buy us a little more time.”

The recommendations in the corridor study are not intended as the final design, Hoeweler said.

“We’ve identified a problem. Here’s a potential solution. When we do a project, everything’s on the table,” he said. “If there’s a better solution 10 years from no, that’s what we’re going to do.”

A final draft of the study will include comments from some of the 70 people who attended the virtual meeting and another 10 who  submitted comments afterward, Hoeweler said.

The study will be presented to County Council for approval, but projects would have to be submitted to GSATS individually for funding. They would compete for funds with other projects in the region.