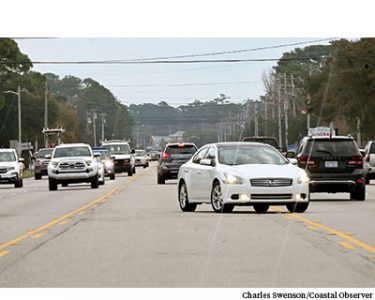 The study recommends a raised median in place of the two-way left-turn lane at Pawleys Island.

The intersection of Bypass 17 and Highway 707 that was expanded last year will fail in two years, according to a new study of traffic on the Waccamaw Neck.

“We built something that has a three-year shelf life,” said Mark Hoeweler, executive director of the Grand Strand Area Transportation Study, which is funding an update of a 2003 Highway 17 corridor traffic study. He called it “a shocker.”

A new design for the new intersection is among the proposals in the update along with three new traffic signals, closing 12 median cuts, adding three roundabouts on side streets and extending the raised median along Highway 17 in the Pawleys Island area. Like the 2003 study, the update also includes a recommendation for expanding the highway from four to six lanes.

A draft of the update by AECOM, a global engineering firm with an office in Columbia, is under review by a local officials and residents who comprise a steering committee. The draft was also provided to another firm, Stantec, that is conducting a land-use study of the highway corridor for Georgetown County. The two firms held joint public meetings in the fall and are due to hold another this spring to present the results.

“Nobody around the table, or the consultants themselves, was enthusiastic about six lanes,” said John Sands, a Murrells Inlet resident who serves on the steering committee.

The 2003 study outlined road improvements and changes in land-use regulations that could delay the need to widen the highway. In the update, AECOM says traffic volumes on Highway 17 are approaching a level of service D on a scale where A means traffic flows freely and F means stop-and-go traffic. In another 20 years, the traffic is projected to exceed that even if the highway is widened.

“We are going to move to a failing condition. We know that. They said that in 2003,” Sands said. “Yes, we can do some things to fine-tune the flow without trying to turn it back into a superhighway.”

“What they’re doing is designing to get people from Point A to Point B as fast as possible and in the safest manner,” he said. “If it takes 10 more minutes to get through Pawleys and Litchfield, why is that a big deal?”

There is no timeframe for the recommendations or cost estimates. Hoeweler asked AECOM to package the projects so they can be presented to the GSATS policy committee for funding. That committee of local officials throughout the region determines priorities for the state Department of Transportation.

“The low-hanging fruit would be to close medians,” Hoeweler said.

There are 12 median closings proposed, including the one at the entrance to Brookgreen Gardens, one at Wesley Road in Murrells Inlet and one at the Hog Heaven restaurant south of Pawleys Island. That work would be accompanied by the creation of U-turn opportunities, he said.

The study also proposes closing the median at Litchfield Boulevard and Country Club Drive and replacing the existing traffic signal with a system of coordinated signals that would allow U-turns at Crooked Oak Drive and just north of Salt Marsh Cove.

There is a traffic signal proposed at the intersection of Business 17 that would create a break in northbound traffic on Highway 17 for southbound traffic to enter the highway. That was proposed as a safety improvement, Hoeweler said.

Other signals are proposed at Blue Stem Drive and Kings River Road. All the signals on Waccamaw Neck need to be part of the adaptive-reactive system that’s already in place in the Pawleys Island area, the study says.

The raised median in the Pawleys Island business district is proposed to extend south to Smalls Loop. That project was also included in the 2003 study.

Goggans was an opponent of the median project before he was elected to the council. “We need to do more of a complete-street design rather than doing what the community has already rejected,” he said.

Complete streets include options for public transit and pedestrians as well as vehicles. Those are included in the study, but Goggans said more detail is needed.

The roundabouts are proposed for the four-way stop at Kings River Road and Waverly Road, the five-way intersection at Kings River, Hagley Drive and Tyson Drive, and at Waverly Road and Petigru Drive, where a project was dropped after local opposition to cutting down an oak tree.

The intersection of Bypass 17 and Highway 707 is proposed for a new traffic flow that would eliminate left turns for everyone except those headed west on 707.

The study proposes a loop road on the northeast side of the intersection that would allow northbound traffic on 17 to go west on 707. Eastbound traffic on 707 would also use the loop to go north on 17.

“If you improve the operation of the intersection, less and less people will be inclined to take the back roads,” Hoeweler said.