Historic crops returns to the fields along the Pee Dee 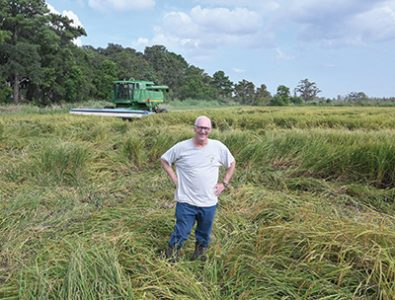 The rice grew so well that Quattlebaum turned it into a business venture: Andy’s Charleston Gold Rice.

“The prices you can get for the heirloom varieties made it feasible,” Quattlebaum said.

The company is named after after Quattlebaum’s son, who died in March 2019 at the age of 22. He is buried on the property.

White House Farms produces two types of Carolina Gold rice: Charleston Gold, which has aromatics, and Santee Gold, which is a long-grain rice.

“It’s native here and it’s the best rice, so why would we plant anything else?” Quattlebaum said.

Quattlebaum had never grown rice before buying White House Farms, so he turned to Dr. Brian Ward at Clemson University.

“Clemson has been very helpful with that,” Quattlebaum said. “They were the ones that helped develop this Charleston Gold.”

White House Farms is in the Plantersville section of Georgetown County between the Black and Pee Dee rivers.

The plantation started producing rice in the early 1700s.

After the the end of the Revolutionary War in 1783, Georgetown County became the largest producer of rice in the world. By 1839, half of the rice in America was grown in the county.

The plantation had belonged to the family of Elizabeth Allston Pringle’s husband, but it was sold at a sheriff’s sale because the family was in debt.

Four years later, in 1879, Pringle bought it back. She hired freed slaves as workers or sharecroppers to grow and harvest the rice until 1910.

“The hurricanes wiped out all the dikes over three years and they couldn’t afford to fix them,” Quattlebaum said.

Pringle sold the property to a consortium in 1920, which used it for hunting.

Quattlebaum restarted rice production in 2017, using the same fields that were carved out of the Pee Dee marsh by slaves. The location makes the fields  rich and peaty and adds to the flavor of the rice.

“That’s what gives the extra flavor and makes it so great for the rice,” Quattlebaum said.

The planting of rice needs to be done in warm weather. Quattlebaum tries to start planting in March, but said it’s usually the end of April before it’s dry enough.

Quattlebaum uses a trunk system to control the level of water, but that doesn’t take enough out, so he had to install pumps to remove even more.

“We can’t put water on the rice unless it’s fresh water,” Quattlebaum said.

Because of the varying salinity levels, all the rice could not be harvested at the same time this year.

After 120 days, the first crop of rice is ready to harvest.

“Once we harvest it, it will grow a second crop in 60 more days,” Quattlebaum said. “It’s 120 for the first crop, but since it’s already sticking up, the second crop is a lot faster.”

Rice starts as a grass that grows straight into the air. The pods contain a liquid, that becomes dough, and then hardens into a grain.

The liquid is a favorite of blackbirds, which destroyed more than half of Quattlebaum’s Santee Gold crop this year.

“We shoot a rifle to chase the birds,” Quattlebaum said. “That’s the one thing they’re scared of, is the crack of a .22.”

The weight of the grain causes the pod to droop, which means it’s time to harvest.

Quattlebaum uses a harvester that strips the rice from the plant instead of cutting the tops off.

After the rice is harvested, it’s run through a machine that removes any remaining leaves or bugs. It then goes into one of three large drying bins that have air pumped in to complete the drying process.

“You can’t pick it fully dry or it will crack,” Quattlebaum said. “You have to have some moisture left in the rice. You get the rest of it out in the drying bin.”

The final steps are to run it through a cleaner and then a length grader to remove all the broken pieces.

And if you want white rice, the grains have to be polished.

Quattlebaum is expanding the operation on the property to include processing and packaging. Right now, all the rice is sent to Edisto after it is harvested, dried and cleaned.

Next year, Quattlebaum will plant a different 100 acres near the 92 acres that is currently being used. It’s called crop rotation, but he is not sure he needs to do it.

“It’s a standard practice, so we follow it, but in the 1700s they grew a rice on everything every year,” Quattlebaum said.

The nonprofit supports initiatives that were important to Andy, like veterans, education, conservation, animals and veterinary schools.