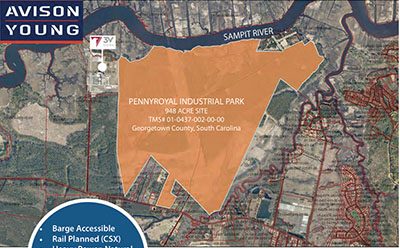 The county is marketing the site that it hopes to buy before the end of the year.

A plan to buy property for an industrial park on the Sampit River was delayed by Georgetown County Council this week after citizens questioned whether $3.75 million in surplus sales tax could be used to fund the purchase.

The county obtained an option on the 948-acre timber tract in 2017 and rezoned it for industrial use. The site is next to Santee Cooper’s Winyah Generating Station and downstream from a 3V Sigma chemical plant. With road, rail and river access, the property is being promoted as a way to attract large-scale manufacturing that won’t fit in the existing industrial park near the county airport or the one outside the town of Andrews.

But rural residents say they don’t want any more industrial development in the area. This week they challenged the use of surplus funds from a capital improvement sales tax for the purchase. “We were assured that the money collected for sales tax had specific, actual projects,” said Eileen Johnson, who opposes the park. She added that “land speculation” wasn’t one of them.

The penny tax was approved by voters in 2014 for $28.2 million worth of projects. A $6 million earmark to dredge the ship channel in Winyah Bay was later dropped. That is part of a $16.9 million surplus collected over four years.

Erin Pate, area director for the Coastal Conservation League, said the law lists the approved uses for the tax. She said industrial parks aren’t included. “Legally sound, important projects” could benefit from the surplus, she said.

After a closed session with county attorney Wesley Bryant, the council agreed to defer a vote on the purchase while Bryant does further research. He said afterward he thinks the park is a valid use of the funds, and noted the law lists items that the referendum “may include.”

The extra review “is a matter of due diligence,” Bryant said.