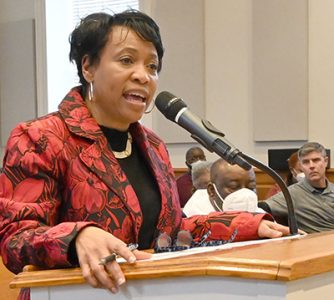 Administrator Angela Christian will present options for tax and pay increases at a workshop April 26.

Georgetown County will be able raise property taxes by at least 5.5 percent this year to cover the cost of operations, according to a budget formula published by the state Office of Revenue and Fiscal Affairs. That would bring in about $3.3 million at a time when the county is looking for ways to increase pay for employees and respond to an outstanding request from the sheriff for eight more patrol deputies.

How much taxes and pay will rise will be the topic of a budget workshop later this month.

“The next workshop won’t be as much fun,” Administrator Angela Christian told council members after a workshop this week. “It will be a much more lively discussion.”

This week, the council heard a proposal from the finance director, Karis Langston, to raise the tax rate for debt service by  27 percent to cover the cost of a new jail. The county plans to issue bonds for the project, estimated at $50 million.

Sheriff Carter Weaver told the council in January 2021 that the 24-year-old jail had become unsafe to inmates and staff. The sheriff’s office first presented the council with proposals for a new jail in 2019, when the cost was $36 million. Weaver said last year that he was prepared to turn the responsibility for the jail over to the county if the facility was not made safe.

Langston said the county expects to issue bonds to build a new facility at the end of this year.

The county’s bond advisors recommended a 3.3 mill tax increase, but said 2 mills should cover the debt. (A mill is equal to $1 of tax on every $1,000 of assessed property value.) The county can also use impact fees to cover the cost. The current impact fees are due to expire next year and the county has commissioned an impact fee study.

Also uncertain is the fate of the county’s $50 annual road improvement fee. A similar fee in Greenville County was ruled illegal last year by the state Supreme Court. The court called that fee a tax, which local governments can only levy with approval of the state legislature.

Georgetown County was sued by a property owner seeking a ruling that its road fee was also illegal and seeking repayment of the fees collected and 10 times that amount as damages, a figure estimated at $260 million.

A bill passed the state Senate 32-7 last week that would amend the law on fees. It will now be considered by the House.

“This is good news for us,” Langston said.

“We’ve budgeted this fund as if the bill will go through,” Langston said.

The Supreme Court ruling did not address what must be done with fees collected in past years. The Senate bill would make the new law retroactive to 1996. Georgetown County had $10.8 million in fee revenue in hand at the start of the current fiscal year.

Langston said the county expects some guidance if the amendment to the fee statute passes the full legislature.

While the law allows local governments to collect property taxes, it limits the amount those taxes can increase in order to fund operations to  the combination of the federal Consumer Price Index and local population growth. The inflation factor, based on the 2021 calendar year, is 4.7 percent. Growth in Georgetown County for the same period was .76 percent.

To raise employee pay by 1 percent would cost the county $500,000 in salaries and another $200,000 in matching taxes and benefits, according to Langston.

Christian told the council earlier this year that she wants to conduct a salary study. She wants to include money in the budget to fund raises, although she said she wouldn’t know how it would be allocated until the study is completed later in the year.