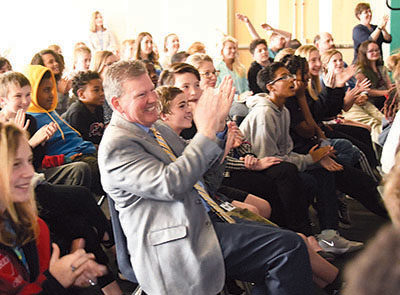 Principal Tim Carnahan and students cheer the announcement of the Palmetto’s Finest Award.

As hundreds of people waited anxiously Tuesday to find out if Waccamaw Intermediate would be named one of the state’s best schools, the unthinkable happened: the two computers set up to live stream the announcement failed.

As school staff struggled to fix the glitches, principal Tim Carnahan and other staff gathered around a television to watch the broadcast, hoping to add a Palmetto’s Finest award to the National Blue Ribbon School honor from 2016.

In the end the computers were fixed in time to hear Waccamaw Intermediate named the state’s top elementary school, setting off a raucous celebration inside the school’s cafeteria.

“All the hard work that these people have put in over the years was very worthwhile,” Carnahan said. “This school should be a model school for others to come visit and see what we do that works for kids. Our kids are successful and we want to share that knowledge with everybody else. That’s the whole idea behind Palmetto’s Finest. We can share what works at our school with others and hopefully help kids across the state.”

“It’s just a real accomplishment,” Dozier said. “It’s not just about a single individual. It’s the school working together: the community, the parents, the staff. It’s really a group effort and it’s a reflection on the dedication and hard work of so many people.”

As the students filed out of the cafeteria to head back to their classes, Carnahan, the only principal in the 11 years since the school opened, shook hands with as many of them as he could.

Culture is a word that is used often when people talk about Waccamaw Intermediate School.

Two important parts that contribute to that culture are all the stakeholders working together inside and outside the school, and making sure the students are having fun.

“You can develop a school in an environment where kids have fun but you still excel in academics and in the arts,” Carnahan said. “It can be done. That was always out goal and our vision.”

Along with the school’s award, he was named the state’s elementary principal of the year in 2017.

“We had a rap about being the fun school, that’s what people would say about us,” Carnahan said. “And then in 2016, [the Blue Ribbon] happened.”

Carnahan has been principal since the school opened in 2008. It was a natural fit since he helped put together the concept of an intermediate school and chose the staff.

“We’ve been growing for 11 years, but at turtle speed,” Carnahan said. “We’re starting to snowball now.”

When Waccamaw Intermediate opened, all the teachers were trained in the International Baccalaureate program. Although the district eventually dropped IB, Carnahan said the school has kept the best practices.

“That’s still the strategies that we use in our classroom today,” he added.

Carey Given was of the school’s original teachers and started its robotics program. She returned for the Palmetto’s Finest announcement. She said from day one Carnahan wanted the best of everything for the school.

“He wanted the kids to learn and have fun,” Given said. “We always just strived to reach that highest point. I’m so proud of them.”

Given taught at Waccamaw Elementary School before moving to Waccamaw Intermediate with students in grades four and five who had been at the elementary school.

“Tim threw in something a little different, I can’t tell you what it was, it just opened it up,” Given said. “This [school] has a great climate. Everybody is a part of this school.”

“So many people have come through this school that have laid a foundation,” Carnahan said. “They all should take part in this award.”

Carnahan believes that a good climate in a school improves test scores.

“Go in a school and look for dimples,” he said. “Dimples on the staff, dimples on the kids. If they aren’t happy, something’s wrong.”

The school has students in grades four through six and is the only intermediate school in the district.

“We have the perfect age,” Carnahan said. “The kids enjoy coming here and they enjoy these extras that we do and we have a staff that works hard at it.”

Hours after his school won the Palmetto’s Finest Award, Carnahan was presenting his budget for 2019-20 school year at the school board meeting. He didn’t have any budget requests, but he  accepted congratulations and took some good-natured ribbing.

School Board Chairman Jim Dumm asked him if anything happened that day at school.

“Something happens every day,” Carnahan answered.