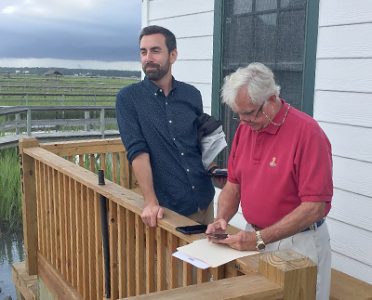 Administrator Ryan Fabbri, left, and former Mayor Jimmy Braswell, see outside the chapel in 2018, gave differing accounts of the meetings.

Henry Thomas, an island resident, filed suit in 2019 saying the council held improper executive sessions at three meetings and failed to give notice or keep minutes of an ad hoc finance committee’s meetings. His attorney, Taylor Smith, asked Circuit Court Judge Ben Culbertson to grant a motion for summary judgment at a hearing in June. Smith said the town’s meeting minutes provided proof of the violations of the state Freedom of Information Act.

Thomas also filed an affidavit from former Mayor Jimmy Braswell supporting some of the allegations.

“This Court finds that a dispute of material facts exists in this case, thus preventing summary judgment,” Culbertson said in a ruling. He is scheduled to hear the case next month.

One of the disputed meetings was held in December 2018. Thomas claims the purpose of an executive session was not announced as required by law. Culbertson said the town’s records show otherwise.

Braswell said the purpose wasn’t announced before the council entered the closed session. But Culbertson noted “the affidavit from the former Town Mayor, while carefully worked so as not to directly contradict the Plaintiff’s affidavit, does not actually support the Plaintiff’s allegation.”

Thomas also claimed that the council discussion during that closed session included other topics than the one listed on the agenda: discussion of police department pay. Braswell said in his affidavit that talk included revenue, beach renourishment, beach access and public parking.

Fabbri said that town revenues were an “ancillary part” of the discussion, but denied other topics were discussed.

“Although his affidavit claims that the discussion in executive session shifted to other matters, it does not explain why the minutes does not state so. If the minutes were incomplete or inaccurate, what was the affidavit silent about it?” Culberton wrote.  “More importantly, the affidavit of the Town Administrator directly contradicts Mr. Braswell’s claim, which is more than sufficient to survive a summary judgment motion.”

The judge followed the same reasoning in claims about two other disputed council meetings.

Braswell said in his filing that Thomas told him about problems with the finance committee records. He said he found that Thomas was correct.

“The former Town Mayor does not specify or identify the [committee] meetings that led him to believe the Plaintiff was correct,” Culbertson said.

Fabbri said the committee meeting agendas and minutes were provided to Thomas by the town.

“Based on the conflicting affidavits submitted by the parties and liberally construing FOIA to carry out the purpose mandated by the legislature, the Court finds that there exists a genuine issue of material fact as to whether or not there was a FOIA violation,” Culbertson wrote.

Town Council met Wednesday afternoon in a closed session with its attorney, Ross DuRant, to discuss the case, which is set for trial on Sept. 13.