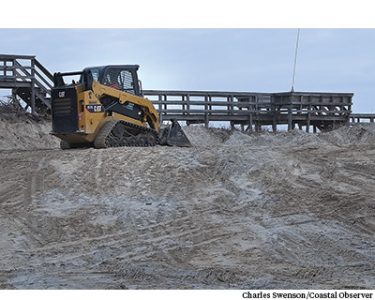 A county official said the dune that was graded in December will be restored.

Georgetown County could issue a permit this week for construction of a house on a newly-created oceanfront lot in North Litchfield.

A Circuit Court judge last week denied a motion to block construction on the property that was subdivided last year. The ruling by Judge William McKinnon was made on procedural grounds.

MAC Coastal Properties, which owns part of an adjoining property, filed suit last month against Georgetown County to overturn the subdivision of a lot on Summertime Lane.

The county planning staff approved the two lots after the owner submitted a form stating that no deed restrictions applied to the property.

MAC Coastal, who are members of the Salley family, contends that restrictions placed on the property by the original developers still apply and wants the court to confirm that.

After the property was subdivided, it was sold for $1.7 million to Shoestring Retreat LLC, whose principals are Bob and Holly McManus. They demolished an existing house and began to level a dune on the property before Georgetown County issued a stop-work order. The county’s dune protection ordinance prohibits the disturbance of dunes, but makes exceptions for construction where there is no feasible alternative.

Boyd Johnson, the county planning and zoning director, said that can only be determined when plans are submitted for a building permit.

Shoestring Retreat’s application for a building permit was received earlier this month.

“We’ve agreed to a plan to repair or replace the sand dune,” he said. “There will be more sand on that lot after the house is built than there was before.”

MAC Coastal, represented by Willard Hanna, asked the court to enjoin the county from issuing any permits until the case is tried. The partnership has also filed an appeal in Circuit Court of the county Planning Commission’s decision to uphold approval of the plat for the two lots.

McKinnon denied the request for an injunction because MAC Coastal did not name Shoestring Retreat as a defendant as required by the rules of procedure.

Shoestring Retreat moved to intervene in the case and argued against the injunction.

It claims in court filings that MAC Coastal didn’t name Shoestring Retreat as a party to the suit in order to avoid having to post a bond for any damages if it fails to prevail. The rules don’t require a bond in cases involving government entities.

If an injunction is granted, “the loss to the proposed intervenor, reflected in total loss of use of the property, exceeds $1.7 million. The court should require a surety bond to cover at least that amount,” Bruce Wallace, attorney for Shoestring Retreat, argued.

Shoestring Retreat also said the MAC Coastal claim didn’t meet the standard for an injunction because it failed “to identify specific harm.” While MAC Coastal said in its complaint that construction on the two 70-foot-wide lots would block its view of the ocean, Shoestring Retreat pointed out that it can already build on a single 140-foot-wide lot.

“The plaintiff does not have irreparable injury based on the issuance of one building permit,” it said in its filings.

The MAC Coastal property also extends to the beachfront, Shoestring Retreat noted, “so any ‘right’ to ocean views is completely unrestricted by Shoestring.”

In its court filings, Shoestring repeated an argument made before the Planning Commission at a hearing in December: that the MAC Coastal property is a timeshare with 13 interval ownerships.

“Plaintiff, having subdivided its property, now seeks to stop Shoestring from subdividing its property,” it stated.

The Planning Commission rejected that argument, saying an interval ownership isn’t the same thing as subdividing a lot.

The commission upheld the staff decision to approve the subdivision because it had received the form from the previous owner, Katherine Haun, stating that deed restrictions didn’t apply. The state law didn’t require the county to research the restrictions and it didn’t have reason to think restrictions did apply, according to the county’s response to MAC Coastal’s appeal, filed last week.

The county “did not have actual notice of any restrictive covenant and were under no obligation to conduct searches in any records offices for filed restrictive covenants,” its attorney, James Gilliam, argued. He asked that the court dismiss the appeal.

Shoestring Retreat argued, in court and before the commission, that the covenants placed on the property by the original developer, members of the Boyle family, were released in the 1970s.

Those restrictions are not the same ones that apply to other property in North Litchfield that are now enforced by the Litchfield Beaches Property Owners Association.

The Boyle restrictions can only be enforced by the Boyles, Shoestring Retreat said, so MAC Coastal lacks standing to ask the court to enforce them.

In a separate filing, Shoestring Retreat asked the court to dismiss the MAC Coastal complaint because it makes the same arguments that MAC Coastal made in its appeal of the Planning Commission decision.

No hearing dates have been set in the appeal.