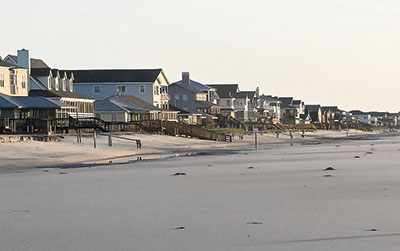 The town has easements for 110 of 113 lots in the project area on the south end.

A challenge to efforts by the town of Pawleys Island to condemn easements on three oceanfront lots for beach renourishment can move forward, a Circuit Court judge has ruled.

But Judge Ben Culbertson told the property owners who are seeking to block the condemnation that even if they win their suits, the town can try again if the current effort is found lacking.

The easements are needed to allow the Army Corps of Engineers to participate in a renourishment project on the island’s south end that was completed earlier this year. The partnership will make the town eligible for federal funds to maintain and repair storm damage to the renourished beach for 50 years.

The town obtained easements from the owners of 110 lots on 1.4 miles of beach. Town Council voted to obtain the last three easements through eminent domain. The property owners filed suit to block the move, saying the easements are no longer necessary because the renourishment work is done and challenging the process.

The town moved to dismiss the suits by Frank Beattie, Barry Stanton and Sunset Lodge LLC, whose principal is Nick Franchina. If allowed to continue their suits, the town sought a $10 million bond from the property owners to cover any damage to the beach that the town would have to repair without help from the Corps.

The state’s eminent domain law allows property owners to challenge the process, and stays the condemnation. Once the condemnation notice is filed with the court, the town has the use of the easement and any further legal action is limited to compensation. The town did not offer any compensation, citing appraisals that showed the properties gained value for the sand placed on the beach by the renourishment project.

“It’s not a very obtrusive document,” Town Attorney David DuRant said of the easements. “All that it is, is the right to go ahead and put sand down.”

The owners claim that it gives the public the right to cross their property to get to the beach, but “that’s just not true,” he said.

The owners want the court to bar the town from ever condemning the easements, DuRant said. “I’ve never heard of that,” he told the court. “I don’t think there’s any case law in South Carolina.”

Stanton represented himself and the other property owners. “How can you get a permanent, perpetual injunction that prohibits the municipality from ever bringing a condemnation action?” Culbertson asked.

Stanton said there was a case that involved Santee Cooper’s plan to run power lines across a golf course. But he added that in the case of Pawleys Island, the plaintiffs were only asking the town be barred from acting under the current set of documents included in their condemnation notice.

“If they ever come up with a project that they can show is a real project, that is publicly necessary and that all they’re asking for is what’s necessary to serve that purpose,” Stanton said, “they can bring another condemnation action.”

And he added, “they have to pay for what they’re taking, instead of something else.”

Stanton said the appraiser didn’t have the description of the easement. “He appraised a different beast.”

The description also changed four or five times during the process, he said.

“The notice that they sent is fundamentally defective,” Stanton said. “It’s one big muddy mess.”

While the town said the property owners failed to state a cause of action, Stanton argued that the suits met the standard and should be allowed to continue.

“It’s hard for me to respond to dogmatic statements,” DuRant said. “I would just ask the court to look at the notice and see if it complies with the statute.”

Culbertson said that wasn’t the purpose of the hearing.

Whether the notice was flawed, Culbertson said, “I don’t know. That’s a matter to be determined at a trial.”

If Stanton can’t support his claims, the town will have the opportunity to find out during the discovery process. In a separate filing, the town sought to delay that until the court ruled on its motion to dismiss the suits.

DuRant said the active hurricane season has raised the stakes for the town. “If we get hit by a catastrophic storm right now, it’s going to be like a $14 million loss to the town,” he said, referring to the cost of the renourishment project for the entire island. “It’s all going to fall on the taxpayers of Pawleys Island.”

“I understand,” Culbertson said. “That doesn’t authorize me to just say, ‘OK, because a lot of money’s at stake we don’t have to follow the law.’ ”

The judge also said he wasn’t aware of any authority that allowed him to require that the plaintiffs post a bond.
“There’s no basis for a bond,” Stanton said.

Although the cost of the easement wasn’t raised in the suit, Stanton told the court that language of the easement “was dramatically different from just putting sand on the beach.” It would allow the town, or the Corps, to tear down his deck and allow “every Tom, Dick and Harry who wants to to come and sit and camp 2 feet from my house.”

“They need to pay me what it’s worth,” Stanton said.

Culbertson said the situation was like the state condemning property for a highway.

The easement contains more conditions than the town needs to place sand on the beach “and which they are not agreeing to pay for,” Stanton said. And since the appraiser didn’t know the terms of the easement, the value couldn’t be accurately determined.

DuRant told the court that the renourishment added $45,000 to $50,000 in value to each plaintiff’s property. The time for Stanton to argue about compensation will come after the condemnation notice is filed in the courthouse.

“If you look at my notice, there’s nothing wrong with my notice,” DuRant said.

If there is nothing wrong with the notice, “then you’re going to win the lawsuit,” he added.

But if the town loses, Culbertson said the town can bring another condemnation proceeding. “You just have to bring it properly,” he said.