Judge rules for homeowners in suits over beach easements 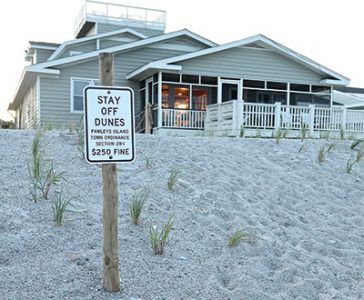 The three property owners claim the easements would allow the public to access the beach across their lots.

A Circuit Court judge has granted a motion by three oceanfront property owners seeking to quash an effort by the town of Pawleys Island to condemn easements for beach renourishment.

Last week’s ruling by Judge Michael Nettles did not specify the grounds for his ruling on the motion for summary judgment. A formal order will follow. A notice of the decision notes that the ruling does not end the case.

Until the order is filed, it is unclear how the case will proceed, attorneys said.

The property owners filed suit in July to block the condemnation, saying the easements are no longer necessary because the town has already completed a $14.8 million renourishment project earlier in the year. They also said the easements would allow the public to access the beach across their property.

The town wants the easements in order to allow the Army Corps of Engineers to participate in the renourishment project along 1.4 miles of beach on the south end of Pawleys Island. That will allow the Corps to repair storm damage along that portion of the beach and pay half the cost of future renourishment projects for the next 45 years.

The town obtained easements from 110 of the 113 property owners in the area eligible for federal participation. It delayed planting beach grass along the southern portion of the renourishment

area so that the Corps could do the work. Town Council voted in May to start condemnation proceedings to obtain the last three easements.

The owners – Frank Beattie, Barry Stanton and Sunset Lodge LLC – also say the process by which the town seeks to condemn the easements is flawed. The town got appraisals that show that the renourishment project added value to the three lots and so it didn’t offer the owners payment. Stanton, an attorney who represents himself and the other owners, told Nettles at a hearing last month that the appraiser didn’t know how the easements would be used.

“All the assumptions were incorrect,” Stanton told the court.

Town attorney David DuRant argued that flaws in the process can be cured and are not sufficient to block the condemnation action. That requires proof of fraud or bad faith, which he said does not exist.

Nettles pointed out that if Stanton’s motion for summary judgment was granted, the town could initiate a new condemnation action.

Stanton agreed it would only affect the current process. But he added, “if you do the same thing again, you’re going to get the same response.”

The property owners’ claim “pretty much delineates a lot of substantial defects in the process,” Nettles said.

DuRant said the town amended its condemnation notice, which he stressed had been served on the owners but not filed with the court. He told the judge it would be expensive to start over again, but also unnecessary.

“He’s acting as if we intentionally did something to defraud him,” DuRant said.

Nettles asked both attorneys to prepare proposed orders, but to do so as Word documents so he could edit them. He told Stanton to pick his three strongest reasons for granting summary judgment.

DuRant met in a closed session with Town Council this week to go over the case. The council took no action.

“Until I see the formal order, I can’t say what the town’s going to do,” DuRant said.

The town has continued to stay in touch with the Corps of Engineers.

“They’re approaching this as if it’s part of the Army Corps moving forward,” Administrator Ryan Fabbri said. “They’re very much moving forward like we’re going to be part of their future plans.”

The agency has the financial documents from the completed renourishment project that it will use to determine how much credit the town will receive on a future project.

Funding from the Corps is likely to be critical to maintaining the beach, since the town spent its beach management fund and took out a $2.8 million loan to pay for the 1.1 million cubic yards of sand placed along about 2.6 miles of beach.  It also received a state grant.

The council had debated ways of raising funds for its share of future renourishment projects, including a property tax and a preservation fund that would accept private donations.