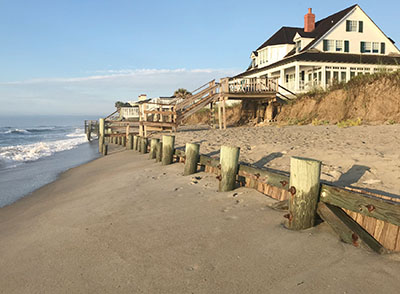 The beach in front is impassible at high tide.

An environmental group is considering its next step after a state Administrative Law Court judge upheld a permit to build three rock and concrete groins as part of a beach renourishment project at DeBordieu.

The Coastal Conservation League and the Belle W. Baruch Foundation challenged the 2018 permit from the state Department of Health and Environmental Control to allow the groins as part of a plan to place up to 650,000 cubic yards of offshore sand on 1.5 miles of beach, starting at the boundary of DeBordieu and Hobcaw Barony.

The Coastal Conservation League continued to argue against the groins, saying the permit didn’t meet the requirements of state law that restricts construction of hard structures on the beach.

Judge Ralph K. Anderson III, chief judge of the court, said in a ruling last week that the permit complies with the law because that portion of the DeBordieu beach has a high erosion rate that threatens existing structures and won’t have an impact on adjacent beach. If there is an impact, he said, the money will be available for mitigation.

“The net result of the project will be an overall reduction in the historic erosion rate. Indeed, Hobcaw will receive a benefit from the project,” Anderson said in his ruling.

Leslie Lenhardt, staff attorney for the S.C. Environmental Law Project, said this week she was still evaluating the ruling and discussing it with the conservation league. It can be appealed to the state Court of Appeals.

“State policy is to preserve and protect the state’s beaches while acknowledging private property rights,” Blanche Brown, general manager of the DeBordieu association, said in a statement. “Our plan does exactly that. It will also ensure Georgetown County a sustained and reliable tax base while improving the wildlife ecosystem.”

DeBordieu also received a state permit in 2011 to build groins as part of a renourishment project. Those were challenged in court and the community moved forward without them, pumping 795,000 cubic yards of sand onto the beach in 2015. It filed the new permit request after a change to the association bylaws created a “beach preservation fund” and knowing there would be renewed challenges to the groins.

As a gated community, DeBordieu doesn’t qualify for public funds for beach renourishment. The groins are intended to trap the sand, reducing the need as well as the cost of future renourishment.

“Continuing to replace the sand without employing tested, environmentally-friendly technologies such as groins would have severe economic consequences, not only for property owners, but the county as well,” Brown said.

The renourishment project will place sand in front of a seawall that was covered by the earlier renourishment, but which is still overwashed by storms.

“Currently, the bulkhead remains functionally intact, but its longevity will be reduced unless action is taken to better protect it,” Anderson said in his ruling. Although Rob Young, a coastal geologist, disputed that structures were threatened, the judge said, “I find that a house does not have to be falling into the ocean to be threatened. Indeed, if a house is falling into the sea, it is no longer being threatened by erosion, it is actively being destroyed by erosion.”