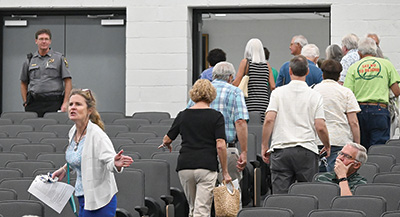 Nicole Barksdale scolds the council after the rezoning vote.

The leader of Keep It Green wore red.

Cindy Person said it was to show solidarity with Benjamin Goff, whose request to rezone 14.8 acres to reduce the size of future lots from a half to a quarter acre she opposed. She got the idea from a social media post.

“I am wearing red tonight, as requested, to show my support for the property rights of the owners of heirs property and minority-owned property,” Person told Georgetown County Council this week.

The council approved the zoning change 4-2. It faces a third and final reading next month.

Keep It Green, a citizens group that has fought several zoning changes that increased residential density, said it will consider a lawsuit if the rezoning gets final approval.

“This decision sets a dangerous precedent that would allow any landowner to request and be granted a zoning change for any reason or no reason and could serve as the foundation for permitting all available land on the Waccamaw Neck to be rezoned to increase density,” the group said in a statement following the vote this week.

The Goff property is located on the east side of Highway 17 south of Waterford Drive. It is currently zoned “residential – half acre.” He wants to change that to R-10, which allows 10,000-square-foot lots.

A social media post urged people to show up and support Goff against “a group in our community staging a backlash and assault against a landowner.”

Cynthia Murray, who also wore red, represented Goff, who sat in the audience. He was a friend of her late father, she said.

“This is not about Mr. Goff’s 15 acres of land,” Murray told the council. “It is about blocking a vision.”

She said her father, Bill Murray, worked for economic growth and stability for all residents. “Now where are we?” his daughter asked. “Is it your vision to block the entrance of new residents and businesses into the county. Why should you care if someone makes a profit from their property. This is America.”

In the opposition, Murray said she saw “subtle, understated discrimination.”

Goff and Murray are Black. All the people who spoke against the rezoning at the council meeting were white.

Mary Beth Klein, a leader of Keep It Green, called the claims an attempt to distract from the validity of the rezoning request using “emotional and politically hot-button issues.”

“These statements couldn’t be further from the truth about the mission of Keep It Green and who we are,” Klein said. “We are all about sustainable and appropriate development that follows the law.”

Other speakers talked about the impact on traffic and stormwater that would increase with the number of lots permitted if the Goff property is developed.

Residents of The Colony, a subdivision on the south side of the Goff property said they would also see an impact on their property values.

“It’s a negative impact of all the homeowners,” said Phil Benincasa, president of The Colony homeowners association.

Cliff Nesbitt, who owns property in the area, spoke in support of the change, claiming it would provide affordable housing.

“All the plantations and all the gated communities have been developed. Never heard none of this,” he said.

Vincent Davis, president of the Pawleys Island Civic Club, a group Bill Murray once led, said it was premature to talk about increased density and traffic. “We have to break it out of the conversation because even if that homeowners sells his land today he can still build up to 29 homes,” he said.

Since Goff only asked for a change to the zoning rather than submitting a development plan, it is difficult to say how many lots could be created, Richardson said.

Opponents say the change will double the number of lots. The planning staff estimated that about 24 would be allowed under the current zoning. As many as 40 might be possible if the lot size is reduced, but the final number would depend on wetlands, stormwater ponds and other infrastructure, Richardson said.

Person said Keep It Green has no objection to the property being developed under the current zoning.

“I want to affirm tonight Mr. Goff’s absolute right as a landowner, minority or otherwise, to freely use his land as it is zoned and as it was zoned when he purchased his property,” she said.

Changing the zoning would not comply with state law that requires that zoning changes comply with the county’s comprehensive land-use plan, Person said. That plan says the county should limit projects that increase residential density on Waccamaw Neck.

“It’s not my opinion. It’s the law,” said Person, who is an attorney. “That applies to every land owner.”

Council Member Bob Anderson, whose district includes the 14.8 acres, drew gasps when he moved to approve a change in the future land-use plan from low density to medium density for the Goff property. That is required before the actual zoning can be changed.

Anderson explained that he wasn’t in favor of the request, but under the council’s rules it can only take “affirmative action.”

“The folks on the Neck feel that they have been abandoned, we have abandoned them, and I’m talking about council,” he said.

The Goff property won’t be developed as affordable housing, Anderson said, because that isn’t possible because of high land prices. “It’s just not feasible or possible on Waccamaw Neck. That’s just due to the way we’ve grown,” he said.

Anderson said he voted for the rezoning at The Colony during an earlier term on the council. That was based on increasing the density from 1.9 to 2.75 units an acre, just above the limit for low density. As a planned development, that could be controlled, he said. The Goff request could allow up to five units an acre.

The county needs to follow the goals of the land-use plan to limit density, Anderson said.

Council Member John Thomas agreed. “There has been no rationale given for how this rezoning would benefit the common good,” he said.

Council Member Steve Goggans said he would have preferred that Goff present the county with a development plan. But he added that the increase in the number of lots allowed by the rezoning wasn’t significant.

If the property is developed and infrastructure takes up a portion of the site, “is there a possibility that it could almost fall back in range based on the buildable land,” Council Member Everett Carolina asked.

“It’s just kind of hard to say at this point,” Richardson said.

Anderson and Thomas were on the losing side of the 4-2 votes on the density change and the zoning change. Louis Morant, the council chairman, recused himself because his law firm has done work for Goff.

“We’ll see you in court,” Klein shouted after the vote.