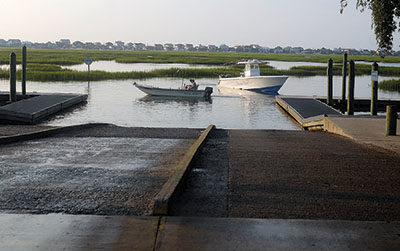 The state turned the landing over to Georgetown County in 2016.

State engineers are working on a plan to reconfigure the parking lot and driveway at the Murrells Inlet Boat Landing to allow Belin Methodist Church to consolidate property to expand its facilities. “We’re hoping to make it better,” Andy Wicker, chief engineer for the state Department of Natural Resources, said. “It will never be perfect.”

The landing and the parking lot are separated by Business 17. The plan will shift the driveway opposite the boat landing north by about 100 yards.

“That’s half the issue. You’ve got people trying to cross and other people waiting,” Wicker said.

The state turned the facility over to Georgetown County in 2016, but it agreed to make improvements to the parking lot and landing, County Administrator Sel Hemingway said.

Belin Memorial United Methodist asked the county last year if it would swap the driveway for a portion of the property the church owns that it has leased to the county as a storage and dewatering site for spoils dredged from the Murrells Inlet channels.

Hemingway said the project was delayed by staff changes in the Natural Resources engineering department.

Belin has started raising money for its Transform project, which will mark the church’s 100th anniversary in 2025. The land swap will allow the church to build a new facility on the property it now uses for parking and the youth group’s annual Mud Bowl.

The county is agreeable, Hemingway said, “but it won’t be happening anytime soon.”

State legislators say they have tried to help the county and Natural Resources stay in touch on the project. “I have tried not to get in the middle of it,” Rep. Lee Hewitt said. “The county and the church want to work it out.”

“The location of this makes it super-challenging,” Wicker said. “I don’t think that there are many that compare to Murrells Inlet around the state.”

The creekfront landing doesn’t have much space for boats to launch while trucks and trailers wait. And boats are getting larger.

“The actual ramp itself is good. There’s just not a lot of turnaround area,” Wicker said.  “The boats are so big and that’s such a small area.”

The size of the boats and trailers also means that Belin will probably give up more property than it gets, Hewitt said. That will allow the vehicles to make the turn from the driveway onto Business 17.

“If they can improve the traffic flow and provide the turn radius needed to get boats in and out of the landing, and help the church, everybody wins,” he said.

“There are reasons to applaud this deal,” state Sen. Stephen Goldfinch  said.

The new design will allow more traffic to stack in the driveway and parking lot. “The last plan I looked at had better traffic flow,” Wicker said.

The work will also resurface the parking lot and upgrade the floating docks, Goldfinch said. “I think it will be a good deal. The current lot and landing are just a mess,” he said.

Wicker said his office is still short-handed. But he also said the county is doing some of the design. Hemingway said it was up to Natural Resources.