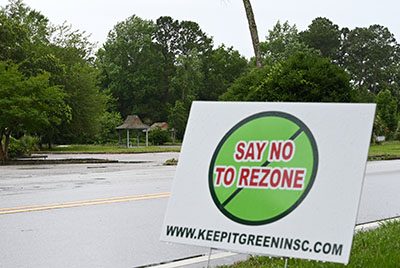 Area residents have opposed previous plans to convert the tennis courts to residential use.

The newest plan for the former Litchfield Racquet Club calls for 19 single-family lots in the place of 17 empty clay courts. At 10,000 square feet, the lots are more than twice the size of 32 lots proposed for the 8.5 acres in June.

The property is owned by Founders National Golf, which closed the racquet club on Halloween in 2018. A change from tennis courts to another use requires zoning approval from Georgetown County.

Redevelopment plans have drawn opposition from a group of former racquet club members who want to buy the property and reopen it for play. Neighbors who oppose converting the courts into homesites have found allies in other communities that border Founders Group golf courses and fear similar redevelopment.

Trey Smith had a contract to buy the property. In March, he proposed 108 one-bedroom condos in nine buildings. He withdrew that plan and submitted one calling for 32 lots of 4,600 square feet, a smaller area than the county allows in its zoning ordinance.

Smith withdrew that plan. Ameri-Built Homes entered into contract to buy the tennis courts. The Myrtle Beach company is building 14 duplex units on an adjacent tract that is also part of the racquet club “planned development” zoning district.

Ameri-Built also submitted a plan for 32 lots, then withdrew it when county planning staff said they would recommend that a traffic study be required before the Planning Commission voted on the rezoning request.

The latest rezoning request was submitted last week, a day before county offices closed in anticipation of Hurricane Dorian. Boyd Johnson, the county planning director, said he hasn’t started the formal review, which will be provided to the Planning Commission for a public hearing in October.

With fewer lots there will be less traffic, but Johnson said that will still be a focus of the staff review. The current proposal will generate 190 trips per day, most of which are expected to go to Highway 17 at Country Club Drive. The tennis clubhouse will be kept for commercial use. It is expected to generate 103 trips a day.

Johnson pointed out that since the racquet club is closed, the courts aren’t generating any traffic.

Another issue that the staff will consider is the density of the original planned development, approved in 1987. It allowed duplexes, but kept the density around 1.5 units an acre because the courts counted as open space. The condo project was 16 units an acre, the maximum allowed in any zoning district. The initial single-family development was 5.1 units an acre. The current plan is 3.2 units an acre.