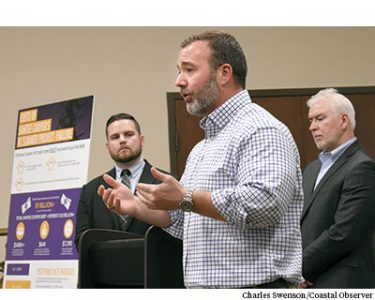 Sen. Stephen Goldfinch with representatives of the Club for Growth and Santee Cooper at a forum last year.

Local lawmakers see no clear path forward in three proposals for the future of Santee Cooper that were released last week. The legislature is due to decide sometime this year whether the state-owned utility will be reformed, sold or managed by a third party in the wake of a failed partnership with SCE&G to expand a nuclear power plant that left it saddled with $4 billion in debt.

“I don’t see anything in the report that leads me to believe that one option is better than another,” state Sen. Stephen Goldfinch said.

He has also raised questions about the report from the state Department of Administration, pointing out that the agreement with the law firm that helped review proposals includes a bonus if Santee Cooper is sold.

“I don’t think anyone was enamored with any of the proposals,” state Rep. Lee Hewitt said, adding that he was troubled by the provision in the law firm agreement. “If you do that, then the report has no credibility.”

The report named NextEra, which operates Florida Power & Light, as the potential buyer. The $9.6 billion deal would give NextEra all of Santee Cooper’s power and water assets in exchange for acquiring its outstanding debt and covering the cost of pending litigation by customers seeking repayment of rates charged in order to finance the failed nuclear project. The state would also keep the $500 million in cash Santee Cooper now has on hand.

NextEra would agree to hold rates at the current level for four years. While Santee Cooper provides direct service to customers in Georgetown, Horry and Berkeley counties, 70 percent of its revenue comes from sales to the state’s electric cooperatives. Over 20 years, NextEra’s rates would rise at a higher level than Santee Cooper proposes under its reform plan, costing customers an additional $161 million, according to the report.

NextEra would cut Santee Cooper’s workforce by 705 positions over the next five years. It would invest in new generating equipment that would reduce costs and carbon emissions and, the report notes, create “opportunities for cost savings through synergies with NextEra’s other utilities.”

But the deal would also exempt NextEra from oversight by the state Public Service Commission for the first four years and it would allow it to collect rates to pay for infrastructure, even if that infrastructure isn’t built due to regulatory issues.

“That says, ‘Whoa,’” Hewitt said, noting that it is similar to the Base Load Review Act that let the partners collect rates to fund the failed nuclear plant. “Why do we want to go down that road again?”

Santee Cooper’s reform plan would reduce rates over the next 20 years by a total of $2.3 billion by shifting from coal to natural gas and renewables as a power source. It would also restructure its debt and reduce its workforce over time.

“Despite some notable strategic mistakes by Santee Cooper, the dedicated employees of Santee Cooper have provided top-of-class reliable and safe service for customers,” the report states. But it also notes that “Santee Cooper does not have a history of effecting the kinds of changes contemplated by the Reform Plan.”

The third option in the report is an agreement with Dominion, which bought SCE&G, to manage Santee Cooper for 10 years. It proposes to carry out Santee Cooper’s reform plan.

“Uncertainty exists around incremental benefits due to the absence of specific proposed cost-saving measures that are not already reflected in the Reform Plan,” the report states.

In the legislature, the issue remains focused on ideology as much as finance. “The feeling I get is that the state doesn’t need to be in the power business,” Hewitt said.

Goldfinch said a colleague from the Upstate told him, “I would allow the state to pay somebody to take Santee Cooper.” He added, “I was flabbergasted.”

Constituents take a different view. “I hear from at least a dozen a day,” Goldfinch said. They tell him “don’t sell Santee Cooper.”

Even if it were sold, Hewitt said, he wants to make sure the state gets something out of the deal. It’s unclear to him if there is a benefit in the NextEra offer. “They’re not doing this because they feel sorry for the state of South Carolina,” he said. Benefits cited in the report are “based on some assumptions. At the end of the day, you might come up with nothing.”

The resolution that led to the three proposals requires the Senate Finance Committee and the House Ways and Means Committee to make a recommendation within 30 days. Hewitt pointed out that the report, which was delayed by a month, arrived as the House works on the budget and the Senate is in the midst of education reform.

“We’ll probably be dealing with this into the summer,” he said. “It’s going to be a fun summer.”