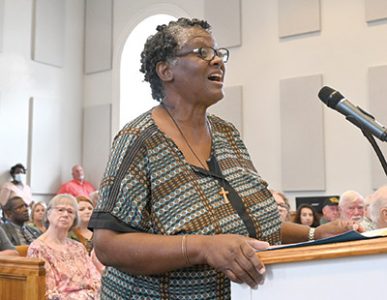 Deborah Greggs asks the council to deny approval for the townhouses near her home.

Plans for two townhouse projects in the Parkersville community were reduced from 109 to 88 units before receiving approval this week from Georgetown County Council.

Area residents said the development still posed a threat to the traditionally Black neighborhood where another plan for 90 more townhouses is still pending.

The lawyer representing the residents said afterward that she expects to challenge the decision in court.

The two projects are planned for property on Petigru Drive and Parkersville Road that is owned by members of the Nesbit family. They have a contract to sell the parcels to Laine Commercial Real Estate of Mount Pleasant, according to the application filed with the county.

The property is zoned “general residential,” which allows multi-family development, but which requires site plan review for projects with more than 10 units. That review is limited to conformity with the county regulations.

Area residents have argued that with 6.8 and 8.3 units per acre the projects are classified as high density, but the future-land-use maps adopted as part of the county’s comprehensive plan designate the area as medium density.

“Zoning must be in accordance with the comprehensive plan,” said Cindy Person, attorney for Keep It Green Advocacy, who represents community groups opposing the projects.

She said after the vote that not only does she expect to challenge the approvals, but

that she is looking at whether the failure to follow the comprehensive plan has a greater impact on minority communities. That would raise civil rights issues.

The county attorney and its planning director told the Planning Commission last month that their review was limited because the projects comply with the current zoning.

The commission voted 3-2 to recommend County Council deny approval. Robert Wilfong, engineer for both projects, said he would amend the plans to show features that commission members said were missing, such as tree canopies and Dumpster pads.

He also increased the road widths to satisfy concerns of Midway Fire and Rescue. That led to the reduction in the number of units.

Area residents told County Council the townhouses will destroy the character of their single-family neighborhood.

Deborah Greggs, who lives off Petigru Drive, recalled two popular bumper stickers that read “Pawleys Island, No Better Place” and “Pawleys Island, Just This Side of Heaven.” That will be lost with the addition of multi-family development, she said.

“We are not opposed to development, we simply want what’s equitable and fair,” said Lynne Ford, who formed the Parkersville Planning and Development Alliance with her husband following the first hearing on the projects.

The proposals will “dump townhouses” in the backyards of current residents, Ford said, questioning whether that would be allowed in other neighborhoods.

The council took up the Petigru Drive plan first.

“I think  it’s a mistake for us to approve 41 units,” Council Member Bob Anderson said.

“We’re just packing too many ‘townhouses’ into too little parcel of land.” He added that the townhouses should be treated like a subdivision because they require separate lots, unlike condominiums and apartments.

“To do otherwise is not only breaking from many decades of precedent, tradition and understanding of the ordinance and the law, but I think may invite all kinds of controversy and lawsuits,” he said. “We really don’t have a choice here but to approve this project as submitted, provided it conforms with all the other requirements.”

“The comprehensive plan by its own terms, its own language, says that the Georgetown County Comprehensive Plan is not a law or ordinance,” Watson said. “It is, as our staff has often said, a guide. They’ve been ridiculed for stating that, but that’s correct.”

Anderson said he isn’t so sure. He learned from talking with the attorney for the S.C. Association of Counties that while a comprehensive plan is required by state law, a zoning ordinance is not, which suggests it has more authority.

“But we do have ordinances,” Goggans said. “That’s the difference.”

“Has it been tested in court yet? It has not, as far as, does the plan take precedence over the ordinances and should the ordinances mirror what’s in the plan. And that’s to be determined,” Anderson said. “I think we’re going to find out.”

The citizens groups Keep It Green and Preserve Murrells Inlet along with the Parkersville residents have threatened to go to court if the county doesn’t bring its zoning into compliance with the comprehensive plan.

Council Member Raymond Newton questioned whether the county could be sued for denying approval of a project that meets the current zoning.

“It depends,” Watson said, but he conceded that it could.

Anderson said he wasn’t trying to change the zoning, just limit the number of townhouses.

“I’m sure they’ll be very nice,” he said. “There’s just too many of them on too little space.”

Both projects were approved 5-1, with Anderson casting the dissenting vote.

The benches in the council chamber were packed for the meeting. Half of them were filled with residents from the rural Lambertown community who told council they are opposed to plans to create a 200 megawatt solar farm on 2,006 acres of timber land.

The council delayed a vote on a zoning change for that project earlier this month so the developer, Silicon Ranch, could meet with residents.

Sam Thomas, an area resident, told council that the environmental impacts will be felt all the way to Winyah Bay.

Amy Brandon said residents will attend the meeting, scheduled for next month, but they won’t be sold on the benefits of the solar farm.

“We do not feel the county has done everything properly. We will be fighting this,” she said.