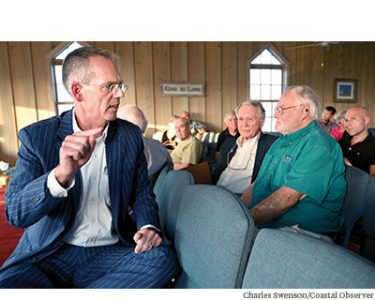 A campaign for Town Council is eroding Pawleys Island’s heritage of gentleness and tranquility the same way that hurricanes have eroded its beach. “Where this is all going, I don’t know,” Mayor Jimmy Braswell said. “It’s crazy. It’s totally dividing the island.”

He faces opposition from Brian Henry, co-owner of the Sea View Inn and Palmetto Cheese. Henry listed the inn as his residence in filing with the Georgetown County Board of Voter Registration and Elections, which handles voting for the town.

Three members of Town Council, who are also up for re-election next month, called a special meeting this week to hear from Butch Bowers, a former chairman of the state Election Commission and a Columbia attorney who specializes in election issues. Braswell said he opposed using a council meeting as a forum, but added his attorney, Billy Jenkinson, to the agenda.

Jenkinson, who has a house on the island, is also attorney for Williamsburg County.

Bowers was hired by Harold Wyatt, a voter in the town. Wyatt said he owns other homes and fears his voter registration could be at risk if there is a challenge to Henry’s qualification as a candidate.

To be able to run for office in South Carolina, candidates must be able to vote for themselves. In order to be a voter, they must have a “domicile” in that jurisdiction. And the law defines a domicile as “a person’s fixed home where he has an intention of returning when he is absent.”

The law also lists 11 factors that can be considered when evaluating someone’s domicile, such as property ownership, their mailing address, their property tax rate and their driver’s license and vehicle registration addresses. But the list is not exclusive, Bowers said.

Jenkinson said he would expand that to ask where they set up their Christmas tree and where their dog lives.

Jenkinson cited the case of Charles “Pug” Ravenel, who was ruled ineligible to run for governor in 1974 because he didn’t meet the residency requirement in the state constitution. Ravenel was born in Charleston, but worked for many years in New York. He claimed it was his intent to return to South Carolina.

The state Supreme Court didn’t question his residency at the time, but said he hadn’t been a resident for five years as the constitution requires.

In its ruling, the high court noted, “intent is a most important element in determining the domicile of any individual,” but added that “any expressed intent on the part of a person must be evaluated in the light of his conduct.” In that case, Ravenel had registered to vote in New York and paid state income taxes there during the time he said it was his intent to return to South Carolina.

“Let’s be practical here,” Jenkinson said. “Every one of y’all know these candidates” and where they live.

Bowers pointed out that the five-year residency only applies to the governor.

Jenkinson disagreed. “In every case, residency is a requirement,” he said.

“How in God’s name to you look into a man’s soul and know what’s in there” to gauge his intent, Council Member Guerry Green asked.

Holliday, Green and Council Member Ashley Carter called the meeting. Green and Carter both have houses off the island, but are registered to vote in the town.

Carter said he is concerned that there will be a challenge after the election, which could lead to special elections.

After the meeting, Bowers told him that is always a risk in municipal elections, which attract the majority of challenges because the turnout is small and success can swing the result.

“You’re never going to immunize yourself from the possibility of a special election,” Bowers said.

“What are the chances he’s got a problem?” Holliday asked, referring to Carter.

Carter has served two terms on Town Council. Green, who also has a home on the mainland, was elected to the council in 2017.

“It was a little bit surprising to me that Jimmy Braswell is claiming that you have to be a full-time resident to run for office on Pawleys Island. That eliminates two council members who are serving,” Henry said after the meeting. “After 35 years, the mayor wants to apply a litmus test. Why now?”

Braswell cited the town’s articles of incorporation from 1985 that call for the election of Town Council by full-time residents. He called out Bowers for not being aware of that, then was called out by Robin Holliday when he admitted he had only read the document last week.

“Calm down,” Town Attorney David DuRant said. “This is not a church meeting.”

The meeting at the Pawleys Island Chapel drew about 50 people, a mix of property owners and voters.

“I think there are some legitimate questions that have been raised,” John Barton, a voter and retired lawyer, said. “Nothing’s going to be done here.”

His wife Beebe, also a retired lawyer, pointed out that challenges to the candidates, or voters, could end up in court. “It’s not a fun thing for anybody but the lawyers, because they’re making a ton of money,” she said.

Robert Moser, another island voter, said he didn’t know where the candidates live, but he plans to find out. “My concern is the next election,” he said.

It’s possible that a developer from Columbia “or god-forbid Myrtle Beach” could claim residency and run for mayor, Moser said.

Bowers said it is difficult to challenge a voter’s residency before a local election commission or in court. He tried it in a case following a state House election in Charleston County.

That was because voters claimed their intent to return to homes even though they didn’t live in them year-round.

Former Mayor Bill Otis asked if people who own more than one home are at risk of being disenfranchised.

“They’re disenfranchising themselves by not following the law,” Jenkinson said.

“I disagree that people are engaging in illegal activity,” Bowers said.

Henry registered to vote on the island when he filed for mayor. Council Member Sarah Zimmerman, who is seeking re-election, asked about how state law applies to people who change residency.

“Intention is the controlling element,” Bowers said. “That’s not me saying that, that’s the Supreme Court saying that.”

Also seeking seats on the council are Leda McIntyre Hall and Josh Ricker. Both have campaigned as full-time residents.

There were 131 voters registered in the town last month. Registration ends Saturday for the Nov. 5 election.