League will close local office as it searches for new director 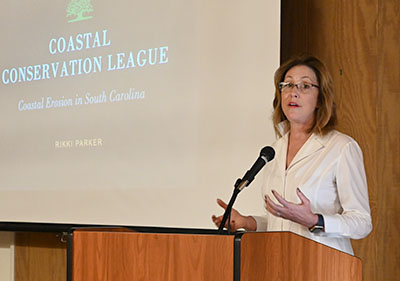 Erin Pate addressed her neighbors at DeBordieu at a program in April outlining the league’s opposition to groin construction.

The Coastal Conservation League will close its Georgetown office while it looks for a new regional director. The league announced last week that Erin Pate will leave at the end of the year as its North Coast director after three years.

“I love what the league does,” Pate said. “I’m needing a little more balance in my life right now.”

Pate has worked on land use issues in Georgetown County, including an update to the future land-use plan that is due to be completed next year. She helped rural residents organize their opposition to the county’s 948-acre industrial park on the Sampit River outside Georgetown.

The county approved the project and the land purchase, but agreed to restrict development to industries that would not have significant impacts on the river.

Pate said she was disappointed that the county decided to move forward with the project, but added “we’ve had some wins in other ways.”

A DeBordieu resident, Pate had also worked to overturn a state permit that would allow the community association there to build three groins as part of a future beach renourishment project. The issue is scheduled for a hearing in the Administrative Law Court in February.

“We are proud of what we have been able to accomplish under Erin’s leadership,” Laura Cantral, the league’s executive director, said in announcing the move. “We are committed to conservation in the northern part of the coastal plain, where the needs are great. We are currently developing a strong plan of our North Coast work.”

Pate took over from Nancy Cave, who had run the local office for 15 years. “She really rooted the Coastal Conservation League in the north coast. Those were big shoes to fill,” said Amy Armstrong, head of the S.C. Environmental Law Project.

“Erin was a valuable community advocate,” she said. “She established working relationships with the community and elected officials.”

The law project started in Georgetown, but now has offices in Beaufort and Greenville.

“From our perspective, you really nave to have boots on the ground to work with citizens and communities,” Armstrong said. “It’s difficult to work on local issues if you have to drive two or three hours.”

While the Coastal Conservation League’s office on Front Street will close, Cantral said the group will have another location in the region. “We just don’t know where it will be yet,” she said.

The league is based in Charleston and also has South Coast office in Beaufort.

“We spend a lot of time in Horry County,” Pate said.

The league has also worked on the Horry County land-use plan and has opposed plans for Interstate 73, which is proposed to run from Myrtle Beach to Michigan. It argues that existing roads could be improved for access to I-95 at less cost and with less impact on the environment.

“The Coastal Conservation League has been a strong voice for the preservation of the coast for many years,” said John Sands, a Murrells Inlet resident who worked with the group on land use issues. “They have had significant influence.”

Sands is the former director of the Donnelley Foundation’s Lowcountry Program. He said there are several other regional and national conservation groups at work in Georgetown County. For the league, “it would make sense to reassess where they are and what they’re doing,” Sands said.

Jim Watkins, who chairs the leadership team for Stop Offshore Drilling in the Atlantic, said he will be interested to see the plan for the league’s North Coast office, although the groups have not worked closely on opposition to federal oil and gas leases for the Outer Continental Shelf.

“Organizations come and go, but everyone needs to be concerned about the coast,” Watkins said.

Pate said she has no immediate plans. “I fully intend to remain engaged in the community on environmental issues,” she said.