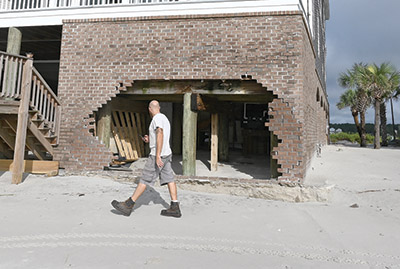 Damage to a house in the Peninsula following Hurricane Isaias in 2020, the year the POA applied for renourishment permits.

Delays to a beach renourishment project in Florida last year have pushed back work on two projects on Waccamaw Neck.

Dredging began last week at DeBordieu to place up to 650,000 cubic yards of offshore sand on 1.5 miles of beach in a project that includes construction of three rock and concrete groins in front of a seawall.  This week, high winds forced the dredge to stop work and move into Winyah Bay.

Once the work is completed at DeBordieu, the dredge will move to Litchfield Beach, where property owners at the Peninsula neighborhood within Inlet Point plan to pump 400,000 cubic yards of offshore sand onto 2,700 feet of beach. The work there was due to be completed before the May 1 start of sea turtle nesting season.

The Peninsula Property Owners Association is asking state and federal regulators to amend its permit to allow work to continue until June 30.

“Based on the latest information from the contractor, the project will likely need until May 30th to complete,” Steven Traynum, project manager for Coastal Science and Engineering, told the regulators in a letter last month. “The permittee is requesting to extend the permit window until June 30th to avoid the need for further modifications if there is a significant unforseeable delay.”

Both projects are being done by Marinex, which completed a renourishment at Pawleys Island in March 2020. Last year, Marinex was hired for a renourishment project at Amelia Island, Fla. It was due to run from May to August, but was delayed by weather and the need for a county permit to use a park as a staging area. Work began in August.

The Florida project was also affected by COVID-19, which led to crew shortages on the dredge and on shore.

Marinex tried to equip a second dredge for the South Carolina projects, according to Traynum. “They have had difficulty obtaining sufficient material (pipe and parts) to complete the necessary modifications,” he told the regulators, the state Office of Ocean and Coastal Resource Management and the Army Corps of Engineers.

The company plans to float its pipes from the borrow area off DeBordieu to a site off Litchfield.

“If the pipe needs to be demobilized, it will require multiple weeks’ worth of time to break the pipe into smaller sections and ship it to a storage area in Charleston,” Traynum said in his request for an extension. “It would then need to be remobilized to the site in the fall.”

He said that the additional construction activity would have an environmental impact that could be avoided by allowing a longer dredge window at Litchfield.

Mobilization is typically the largest expense in a dredging project.

The Peninsula POA will pay for additional monitoring to protect sea turtles offshore and on the beach, Traynum said. Its members are also willing to bear the impact of the work on beach rentals, he added.

If the renourishment has to wait until the fall, Traynum said there will be no nesting habitat for sea turtles on that portion of Litchfield Beach and no protection from storms for the property owners.

It would also reduce the dry sand beach available to the public, he said.

The deadline for public comments on the application was extended from March 7 to March 31. Send comments via email to slagelmj@dhec.sc.gov.

Update: This article was updated from the print version to include the extension of the comment period.