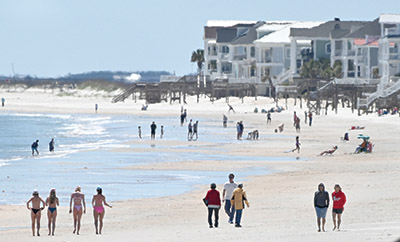 Offshore sand will be pumped onto 3,400 feet of beach at the south end of Litchfield Beach.

A renourishment project at the south end of Litchfield Beach is on track to begin next month. State and federal agencies have agreed to allow the work to continue until June 30.

The contractor, Marinex, is about halfway through a renourishment project at DeBordieu. Work there was delayed because a project in 2021 at Amelia Island, Fla., was behind schedule due to weather and permitting issues.

“We’re hoping they’ll just jump straight over to Litchfield,” said Steven Traynum, the manager of both local projects for Coastal Science and Engineering.

The sand pumping at DeBordieu is currently scheduled to finish in mid-May. The dredge moved last week because of rough seas and was towed to Charleston for repairs, Traynum said.

Sea turtle nesting season begins May 1. In extending the project window beyond that date, the Office of Ocean and Coastal Resource Management conditioned its approval on adherence to sea turtle monitoring  programs outlined by other agencies.

Neither the U.S. Fish and Wildlife Service nor the National Marine Fisheries Service objected to the project extension.

The property owners association at The Peninsula, a portion of the Inlet Point community, first applied in 2020 for permits to place offshore sand on nearly a mile of beach. That met with opposition from other property owners within Inlet Point who feared they would end up sharing the cost to build up the beach in front of the 33 lots in The Peninsula.

The project was revised, including one proposal to truck in upland sand that met with opposition outside Inlet Point.

The project now calls for placing 450,000 cubic yards of offshore sand on 3,400 feet of beach.  The goal is to build up a dune to prevent water from washing under the houses during high tides and storms.

While opponents said they are concerned about sand washing into Clubhouse Creek behind the houses and into Midway Inlet, Coastal Science has said that building up the front beach will help reduce the flow of sand into the creek during storms.

One person who commented on the extension request dismissed the firm’s argument, according to documents obtained through the state Freedom of Information Act.

“Please do not bore me or silence my concerns with Coastal Science’s assessments,” wrote the person, whose name was redacted.

Another person, also unidentified, said the project should wait until after the turtle season. “The noise and disruption of their environment will adversely effect the nesting,” the person wrote. “This is simply a cost saving measure on the part of the Peninsula.”

According to Coastal Resources, it only received two public comments.