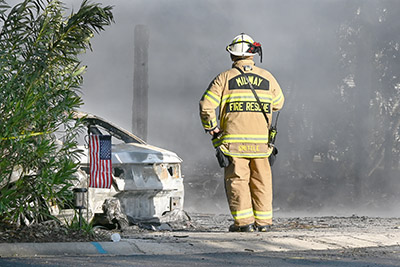 The home at Litchfield Breezes burned to the ground. The couple’s adult daughter escaped with her dog.

Two people were killed in a fire that destroyed a house on Windy Lane in Litchfield on Thursday.

A woman who escaped the blaze told firefighters that her father heard the smoke detectors going off and woke her up to tell her the house was on fire. She then briefly saw her father and mother in the hall before going back into her bedroom to get dressed. When she went back into the hall her parents were gone.

“Everybody was awake and orientated,” Fire Marshal Mark Nugent of Midway Fire and Rescue said. “They were moving around, we’re just not sure where they went or what they did.”

Paul Diaz was delivering papers for the Coastal Observer at around 5:20 a.m. when he saw a red glow across from the Litchfield Restaurant. Diaz called 911 to report what he thought was a brush fire in the Holy Cross-Faith Memorial Episcopal Church cemetery across from the restaurant.

“I thought it was a bush was on fire in the graveyard,” Diaz said.

As he walked across Highway 17, Diaz told the 911 operator that it was a house that was on fire.

“I threw the phone down and jumped the wall and ran to her,” Diaz said.

When Diaz saw how close the fire was to the house’s propane tanks, he grabbed the woman and helped her down the porch’s stairs and away from the house. At that time the woman started screaming that her parents were still in the house.

“I put her on a chair and I turned around and ran back to see if I could get in,” Diaz said. “I ran to the back and I couldn’t see. The fire was already on the steps.”

At that moment the house’s air conditioning condenser exploded.

“It freaked me out,” Diaz said. “I thought it was the propane tank.”

“We appreciate what he did,” Nugent said. “He risked his life.”

An adjacent house was also damaged by fire, but Nugent said it was unoccupied.

Nugent said the cause of the fire is under investigation, but because of the extent of the damage it may never be known.

Midway did not release the names of the man and woman who died, nor their daughter.

Firefighters from Midway and other area departments remained on the scene for hours, along with investigators from the office of the State Fire Marshal and the S.C. Law Enforcement Division.