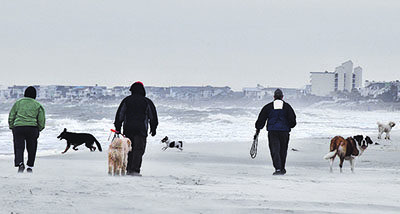 Dogs out for morning walks at North Litchfield can be off their leash until 9 a.m. under county rules.

Property owners at the Litchfield Beaches want Georgetown County to follow state law when it comes to keeping dogs on a leash. They have the backing of County Council Chairman John Thomas, a North Litchfield resident.

Georgetown County allows dogs on the beach to be off the leash from 7 p.m. to 9 a.m. as long as they are under the owner’s voice control.  State law requires dogs to be leashed when off their owner’s property.

The board of the Litchfield Beaches Property Owners Association voted last week to ask the county to post the state law rather than the county rules on signs at beach accesses.

“I don’t have problems with dogs on the beach,” board member Ernie Taylor said, but he added, “we should make the signs clear.”

Board member Charlie Baker said he no longer takes his dogs on the beach because there are other dogs off the leash. He is also concerned about unleashed dogs jumping on his grandchildren.

The association puts out bags for dog owners to pick up pet waste. When dogs are off the leash, owners are less inclined to clean up, Baker said.

Those were the same issues raised by the town of Pawleys Island when it amended its leash law in 2009 to follow the state law. The town revised its rules again last year to allow dogs to be under voice control from Oct. 1 through April 30 and from 8 p.m. to 8 a.m. from May 1 through Sept. 30.

Thomas said the county needs to move in the opposite direction. “The county ordinance is wrong. It doesn’t reflect the state law,” he said.

New signs for the beach accesses have been promised by the county Parks and Recreation Department for about 18 months, Thomas said, and he believes this is a good time for the county to make a change.

“If I’m walking my dog on the beach and another dog is running free and comes up to my dog, which has happened as long as I’ve had a dog, that creates a defensive reaction for the dog on the leash,” he said. “It’s not fair to people who have dogs on a leash.”

As a dog owner as well as a former president of the Litchfield Beaches POA, Thomas said he understands that people want to take their dogs to the beach and let them run. If it was possible to limit that to the winter when there are no other dogs around, he wouldn’t object.

“It’s difficult to make rules that way,” Thomas said. “That’s why we should follow the state law.”