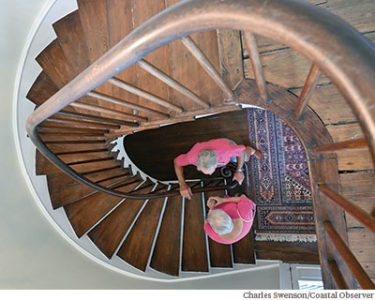 The curved staircase is a popular setting for bridal photos.

Property owners at Litchfield Plantation have brought the 18th century home at the heart of the community back to life. And they haven’t seen any sign of the ghosts reputed to inhabit the property. “If there is a ghost, it’s a happy ghost,” said Angie Bunn, president of the homeowners association.

The homeowners took control of the historic property last summer. For the first time since development began at Litchfield Plantation 50 years ago, the association and its assets are controlled by the property owners rather than the developer. Through a series of court challenges, the owners ended a system that allowed the Litchfield Plantation Co. a majority of one when it came to electing members of the association board that controlled the common properties, which also include a beach house on Pawleys Island. The board then foreclosed on loans from the association to the development company that were partly secured by the plantation house.

During the last year, property owners made repairs and renovations that were on display over the weekend at an open house that preceded a vocal concert in The Abbey, an Anglican church that bought the former carriage house at the plantation in 2014. The event drew about 120 people.

“This type of community effort is an excellent way to expose not only the culture, but the historic significance of the house,” Bunn said. She and her husband, Joey, have lived in Litchfield Plantation for 30 years.

Landscaping around the plantation house also received an upgrade.

The house and oak allée are first shown on a plat from 1794 drawn at the death of Peter Simons. Renovations were carried out by subsequent owners, the latest was in 1970 after the Litchfield Plantation Co. was formed to develop the surrounding property

Homeowners had the right to use the house and the association was responsible for its maintenance. The house was also used as an inn and a wedding venue. For several years before the foreclosure sale, homeowners didn’t have access, Bunn said.

Some recent residents didn’t know the house was an amenity, said Tom Eckard, the association president at the time of the sale. As he directed visitors between the house and The Abbey on Sunday afternoon, Eckard said the volunteers who worked on the house fulfilled his expectations. “It gives you a sense of community,” he said.

The association made repairs to the roof and to parts of the interior that had received water damage. A six-member plantation house committee started work by taking an inventory of the contents and determining how each room could be used, Bunn said.

“We really wanted a club room,” she said. “That’s important because there are people who feel like their club was removed from them.”

A room on the ground floor that had been used as a guest bedroom now has a table for eight. It’s just off the kitchen and a small library. The kitchen is still due for renovations. “We want to make that more of a catering kitchen,” Bunn said.

The upstairs ballroom was repainted and the furniture repaired. “We wanted to use as much of the original furniture as we could, and we have,” Bunn said. “It was worn and tattered.”

Upstairs bedrooms and baths were also refurbished so they can be used by bridal parties when the house hosts weddings. The first was held in June. Another is scheduled for November, and four more are booked for 2020. The revenue from the events will help with maintenance and future renovations.

“We don’t want to fill up every weekend. We want to do it enough to offset some of the expenses,” Bunn said.

Volunteers have done much of the work, including polishing furniture and brass. That’s also increased the sense of ownership among the community.

“You can’t imagine that it needed that much work, but it did,” Bunn said. “We have an excellent group of volunteers.”

There is another former guest bedroom off the main room where the furniture needs work. That is being considered for a game room. The wooden floors also need refinishing. There is a terrace off the main room that overlooks the former rice fields. The homeowners are considering ways to cover that. Some people just like  to watch the sunset from the terrace.

“Having the house open and in repair and available to homeowners is the most important thing,” she said. “We won’t ever be able to make it exactly as it used to be, but we feel like we’re doing a good job.”