Loggerhead makes its mark in a busy nesting season 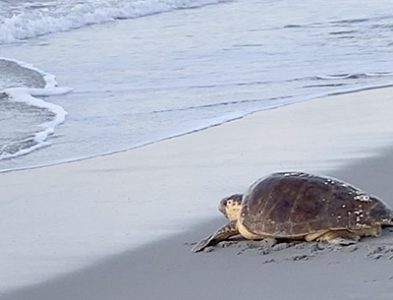 A loggerhead returns to the ocean after nesting at Litchfield Beach. Rick Scott, a SCUTE leader, photographed its journey.

An old friend has returned to the area this summer.

Gimpy, a loggerhead turtle that is missing its left rear flipper, nested on North Island in May and at Hobcaw in June.

Gimpy has been nesting, and trying to nest, in the DeBordieu area for more than two decades. In 2020, a volunteer with S.C. United Turtle Enthusiasts actually had to help Gimpy dig a nest for her eggs.

The return of the familiar turtle is part of a nesting season that the volunteers who monitor the nests say has been good so far.

“I don’t know if she’s just getting the hang of it after all these years, but these are two nests that she’s laid completely on her own,” said Betsy Brabson, who leads the DeBordieu volunteers for SCUTE. “She’s a lesson in longevity and perseverance. She’s an inspiration to us, and we all have an affection for her because we do feel like we know her.”

Because of the amount of predators on North Island, SCUTE volunteers don’t usually cover and protect the nests there. But they did when they saw Gimpy’s tracks.

“Because she’s special and we know her, we did put a cage over her nest chamber,” Brabson said. “So far, they haven’t gotten in it.”

It is likely that Gimpy will visit at least one more time before nesting season is over in mid-August.

Brabson is also excited that a green turtle nested on DeBordieu on June 5. Green turtles leave distinctive tracks, which are wider than loggerheads because their flippers are longer.

“The tracks are like chop marks and they’re parallel because green turtles crawl with their flippers simultaneously, kind of like doing the butterfly stroke. Loggerheads are more like freestyle: left, right, left, right,” Brabson said. “It’s exciting to have a different kind of turtle and learn about different characteristics. So that will be an exciting inventory.”

Green turtles also dig deeper nests and their eggs are bigger and have more yolk.

Brabson expects the nesting season on DeBordieu and Hobcaw will end up better than 2021, which was a good year, but not as good as 2019, when the state set a record. There were 67 nests as of this week.

The number of nests is about the same as last year but much better than two years ago when there were 14, Schneider added.

Schneider expects to see the first hatchlings during the last week of this month.

Although the state Department of Natural Resources has lifted the restrictions on public nest inventories that were put into place during the COVID-19 pandemic, Schneider will only release information about inventories if they occur in places easily accessible by the public.

Inventories south of the public parking lot on the south end of the island will not be advertised.

“That’s not easily accessible. Those will be done privately,” Schneider said. “I’m not saying somebody couldn’t join us who’s walking on the beach. But it’s not going to be advertised.”

Both Brabson and Rick Scott, who leads the Litchfield Beach volunteers for SCUTE, are dealing with areas of new sand pumped onto the beach by renourishment projects.

There have been no nests in the new sand at DeBordieu, which was part of a project that wrapped up in May, although a few turtles have crawled over it to get to older sand on the dunes.

Brabson said it will probably take a year or two for the renourished sand to become more natural.

“We feel the density of the sand makes it difficult for turtles to dig out their chambers,” she added. “It is difficult for the volunteers to probe in unless they have aluminum probes.”

SCUTE members have been monitoring the work area from 9 p.m. to 6 a.m. when the dredge is working.

“My uneducated opinion is that they’re not being deterred too badly,” Scott said. “They may be redirected, but they’re still coming on a beach somewhere.”

One turtle climbed up a sand hill that provides a crossing point along the dredge pipe that emerges from the ocean at Inlet Point and runs south along the beach. The turtle climbed back down, dug its nest on the ocean side of the pipe, then continued its journey over the pipe, around its north end and back to the water.

He was surprised that the turtle nested so close to the pipe. Overall, he has found the new sand better than he expected.

“I dug into it and it was  not like concrete, but it was pretty tough,” Scott said.

“The locals here are just loving the fact that they are some of the best shells they’ve ever seen,” Scott said. “Conch shells the size of your fist.”

Litchfield by the Sea, which isn’t a popular nesting area, has six already this year.

“We kid each other that all the dredging is pushing all of my turtles north of here,” Scott said.

After 21 nests in 2021, there have been 13 on Litchfield Beach. Scott expects to come close to last year’s total.