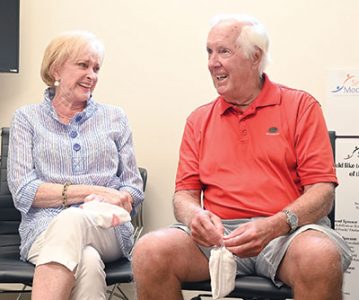 Lois and Carl Fisher on their last trip to the Smith Medical Clinic.

Their time, their talents, their money and their love.

Those are some of the things Dr. Carl Fisher and his wife, Lois, gave to the Smith Medical Clinic during the last quarter century.

COVID-19 forced the DeBordieu couple to step away from the clinic months before a planned move to Charlotte.

“I just decided that I couldn’t come back to work because I couldn’t take that chance on getting sick at my age of 77 years old and not be able to function to see my grandchildren grow up,” Carl said. “The pandemic has done me in a little earlier that I wanted to.”

The clinic, on the campus of Holy Cross-Faith Memorial Episcopal Church, provides free medical care for the working poor.

“We’ve had a good run,” Lois said. “It’s such a bittersweet move to leave all that we’ve had here. The friends we’ve made and the involvements we’ve had with the Smith Medical Clinic and other things.”

Carl said he will miss the people most of all.

“The employees, in particular, and the patients,” he said. “They’ve just been wonderful to me.”

Dr. Cathcart Smith established the clinic inside a trailer on the church campus in 1985, using fixtures from his medical practice. Carl, an obstetrician and gynecologist, began volunteering in 1999.

“When I first started working here, I was the only doctor here,” Carl said. “I would come in and see three or four patients.”

He eventually recruited almost every doctor in DeBordieu to expand the number of patients the clinic could serve.

“I used to kid people at parties,” Lois said. “Don’t let him know you’re in the medical field because he will have you over in the corner in a conversation about volunteering. He really did recruit a lot of people, and they’re still here.”

Carl had to expand his focus when he started volunteering at the clinic.

“He would come home and look things up,” Lois said. “He had to learn more about high blood pressure because there’s so many patients in this community that have that. And diabetes.”

“Sixty percent of our patients are women and always will be,” said Anne Faul, executive director for the clinic. “So having someone that provides women’s health care is incredibly important.”

“The biggest reason I dropped the title is because I didn’t want to go to meetings because we never got anything accomplished,” Carl joked.

“When Carl was the medical director and I had a bad day … I could just go and kind of vent to him,” Faul said. “He’s a great listener. He was always reassuring and he was always confident.”

In 2000, the clinic moved into a building on the campus that was once a dormitory for a summer camp. The space was bigger, but not by much.

“It was almost as bad as the trailer,” Carl said.

“The exam rooms were in closets,” Lois said.

The clinic built its current space in 2016 and now has 200 volunteers.

The Fishers lived for years in Charlotte,  but fell in love with DeBordieu on a visit in 1989.

They purchased a villa one week later and eventually built a house on the creek.

In 2001, the couple decided to settle permanently in DeBordieu and Carl started a private practice. It opened on Sept. 11.

“That was not a good start,” Carl said.

The practice lasted for one year before the Fishers decided to go back to Charlotte.

“It was an interesting time,” Lois said. “We loved the year that we did it. We had wonderful, wonderful patients.”

In 2009, the Fishers retired for good to DeBordieu and Carl started volunteering full-time at the clinic. Lois also helped out with fundraisers, including black-tie parties she and Carl hosted.

The clinic added a vision center in 2013. After it opened, Faul was dismayed at how many patients had serious conditions that the clinic would have to pay to get fixed. She confided in Carl that she thought they had made a mistake and the center would bankrupt the clinic.

Carl told her the clinic had the same issue with things like breast cancer when it opened.

“When I first started here, I saw more cancer here than I did at my practice in Charlotte, mainly because people weren’t getting care until they came to see us here,” Carl said. “I was always so startled at that.”

Carl reassured Faul that regular treatment would decrease the number of patients with serious vision problems.

“He said, after a year or so of doing the screenings, things will settle down,” Faul said. “That’s exactly what happened.”

The clinic closed for a few weeks during the start of the COVID-19 pandemic. Once it reopened, it changed the way it operates for safety reasons.

“It’s been interesting [and] it’s been scary,” Faul said. “I’m grateful beyond words to the people who do still come and volunteer and who have helped us figure it out.”

The staff follows the ever-changing guidelines from the Centers for Disease Control, including restricting access to the building, screening everyone who enters and requiring that masks be worn at all times.

“Some volunteers won’t be able to come back until there is a vaccine because they fall into that very high risk category,” Faul said.

Since his official retirement in June, Carl still swims and walks several miles on the beach every day and plays a lot of golf.

“We do a lot of physical activity,” Lois said. “We try to keep the old joints moving.”

Carl is uncomfortable with all the attention he’s getting since word got out that he has left the clinic.

“It’s humbled me to no end because I’ve gotten a lot of credit that I don’t really deserve that much,” Carl said. “I’ve enjoyed it very much. It’s going to be another sad day when we leave.”