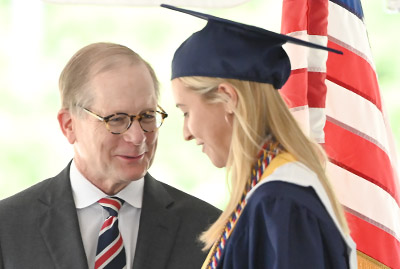 Scott Gibson with the valedictorian at this year’s graduation.

Col. Scott Gibson is no longer head of school at Lowcountry Prep School, and unhappy parents want answers from the school’s board of trustees.

“Whoever made this knee-jerk reaction maybe didn’t have a pulse on what was really going on at the school,” said Suzanne Temple, the mother of two students. “The colonel has been instrumental in creating an environment where people felt welcome. Whatever your persuasion was. I think that’s where he’s been the light for us, and he did such a great job during COVID.”

“As a vested family, with over 23 combined years of paying full tuition, we have never seen the school thrive as much as it has under his leadership,” Dr. Ben and Maureen Davis wrote in an email to the Coastal Observer.

Gibson was hired in 2012. He spent 20 years working in intelligence and counterintelligence in the Air Force before retiring and starting a new career in education. Along with Lowcountry Prep, Gibson was also headmaster at his alma mater, Boys’ Latin School in Baltimore, and St. Paul’s Episcopal School in Mobile, Ala.

Last week, a group of parents and students held a rally at the school. There was supposed to be a board meeting that night, but it was canceled.

Temple said she never heard any negative comments about Gibson, which is why his leaving came as such a shock. She’d like there to be an informational meeting for parents, perhaps at an off-campus location, where board members would be invited to speak.

“When you have a situation where people are upset, the worst thing for you to do is ignore them,” she added.

This week, the board released a statement: “We, as a board, accepted Colonel Gibson’s resignation. We wish him well in his future endeavors. Lowcountry Preparatory School is in excellent hands with our current interim Heads of School, and we look forward to a successful start to the new year.”

The Davises sent a letter to the board demanding the reinstatement of Gibson and the resignation of board member Lindi Brooks, who they believe “forced” Gibson to leave.

In their letter, the Davises said the board is not living up to its responsibility to ensure the school fulfills its mission.

“The mission, ‘to inspire the passion to learn, the courage to lead and the commitment to serve,’ is precisely what Col. Gibson has brought to Lowcountry Prep. He has been instrumental in nurturing the school along a steady path of growth without compromise of its vision,” the letter said. “He is a tangible role model to students and their families. This nurturing is clearly seen in the school’s growth over the last decade and is also reflected in the faces of its students.”

The Davises also said a “select subset” of members held “clandestine deliberations” that resulted in a “unilateral decision to terminate” Gibson.

Brooks signed a letter on behalf of the board on Dec. 9 that commended Gibson for his service and recommended him for future employment.

“Over his eleven years of service, Head of School Gibson’s leadership resulted in substantial improvements in the school’s program. In turn, these improvements yielded a 98 percent increase in enrollment between 2013 and 2022, as well as solid financial sustainability for the school well into the future,” it said.

It concluded, “Head of School Scott Gibson III has left a lasting mark upon Lowcountry Prep School over his eleven years of service. With gratitude, we plan to build upon his work.”

The school’s staff was asked to not discuss the situation.

Jeanie Floyd and Tara Lavallee, the assistant heads of school, sent a text message saying, “Please be cognizant that you are representatives of the school. If contacted by a parent, student, or any other person regarding the Colonel’s departure, employees are requested not to engage in discussions or offer opinions on this confidential matter. We are to support his decision and wish him the best.”

“I think that’s the wrong kind of environment to present to our children,” Temple said. “Your job is to educate. The board’s job is to help facilitate that.”

The Davises and Temple said they are looking for more transparency and communication from the board.

“The Board now has the opportunity to pull back the curtain of secrecy and cronyism and to begin a new chapter of transparency and accountability,” the Davises wrote in their letter to the board.

Temple is committed to keeping her two children enrolled at Lowcountry Prep.

“I enjoy where my children are at. I enjoy the school. I enjoy the teachers. I enjoyed the colonel,” she said. “But there’s a lot of people that are questioning their financial commitment.”