Margin gets tighter as duplexes move ahead – Coastal Observer

Margin gets tighter as duplexes move ahead 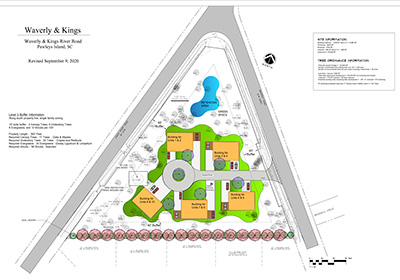 Pleas to deny a zoning change to allow development of 10 units at the corner of Waverly and Kings River roads picked up two more supporters on Georgetown County Council, but those were not enough to defeat the proposal.

The council this week voted 4-3 to approve a change to the future land-use map from “low density” to “medium density” for the 3.3 acres. The map change will be up for a final reading in December along with final reading of the rezoning from “half-acre residential” to “flexible design district.”

Under state law, zoning has to comply with the land-use plan. While that is usually a technical issue, it has provided another opportunity for opponents of this project, known as Waverly and Kings.

Under the current zoning, the property could have up to two units an acre. That is considered low density in the ordinance. The duplex project would have a density of 3.27 units an acre, which is medium density. The land-use map has to be changed to make the zoning change legal.

Opponents, including neighbors and members of the citizens group Keep It Green, have turned out at every step of the process to urge the county not to approve a change that would increase the number of units from six to 10.

“Call me crazy, but I’m here again tonight,” Mary Beth Klein, a leader of Keep It Green told the council this week. “Incremental increases in density in the Lower Neck have had a cumulative effect.”

While opponents have raised concerns about traffic and stormwater and questioned whether the county is following its own ordinances in making the change, Klein said the top issue is flooding. She pointed out that Council Member Everett Carolina raised questions about that previously because flooding is an issue in his district along the Santee River.

“We have an issue, a very serious issue,” Klein said. “Who in good conscience would add to that issue?”

Cindy Person, another leader of Keep It Green, also singled out Carolina.

“If you had 500 emails begging you not to increase density,” she told him, “you would vote with your people.”

Person added, “I find it absolutely astounding that anyone would do otherwise.”

Council Chairman John Thomas failed to get a second last month when he moved to deny the rezoning on second reading. He was the lone dissenter in a 6-1 vote.

This week, Thomas was joined by Carolina and Council Member Ron Charlton in opposing the map change. “It surprised me,” Thomas said afterward. “I’ve been trying to talk to them to convince them to go along with me to deny it the first time. There was deafening silence.”

Council Member Steve Goggans, whose district includes the project site, moved for approval. He got a second from Council Member Raymond Newton. Council Members Lillie Jean Johnson and Louis Morant were in favor.

Goggans says he favors the project because it “sits more lightly on the land.” It was also recommended for approval by planning staff, who said that by clustering the duplexes the project will retain 87 trees and leave 2.4 acres at the site undisturbed.

Keep It Green argues that increasing the number of units violates the goals of the future land-use plan and that there is no public benefit to the project, as required by the zoning ordinance.

“It’s not supposed to be amended willy-nilly,” Person said.

And while opponents say they fear that the area will end up looking like Myrtle Beach or Mount Pleasant, Person pointed to Horry and Charleston counties as examples to follow. “Both have excellent ordinances that follow the state law right down the line,” she said. “Georgetown County is flying by the seat of its pants.”