Marker will help preserve chapel as it educates – Coastal Observer

Marker will help preserve chapel as it educates 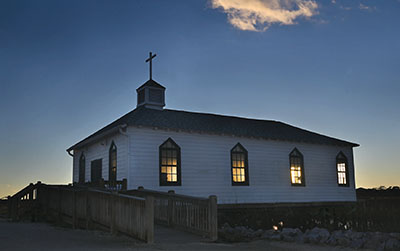 Historic status will ensure the chapel can be repaired without being elevated.

The Pawleys Island Chapel has secured its place in history. This summer, there will be a marker to prove it.

The state Department of Archives and History has approved an application by the nonprofit Pawleys Island House of Worship to place a historical marker at the chapel, which overhangs the marsh on the west side of Myrtle Avenue. The recognition should also help ensure that the chapel can be maintained without having to be raised like surrounding houses to meet federal flood regulations.

The chapel was raised 1 foot and moved 8 feet farther from the street during a renovation in 2018. The flood rules require that existing structures be brought into compliance if renovations exceed 50 percent of their value.

“They pretty much ate up their 50 percent,” Fabbri said. “They would have to elevate that whole chapel 12 feet in the air.”

The S.C. Historical Marker Program isn’t as stringent as the federal National Register listing. It is intended to educate while the federal program is about preservation, said Edwin Breeden, coordinator of the state program.

“The marker program doesn’t place any restrictions on what can be done to a property,” he said.

But it is a way to show historical significance, which is what counts in the flood regulations, Fabbri said. The town could also grant a variance, but that would jeopardize its standing in a program that gives island property owners a discount on their federal flood insurance premiums.

“It helps a lot if there’s damage to the chapel,” said Betsy Altman, a chapel trustee. “If there’s a storm, you can do more than 50 percent” of the value on repairs.

The marker also makes sense for other reasons. The chapel is an island icon that prompts a steady stream of visitors to stop and look. When it was decorated for Christmas, “almost every day at some time there was a family on the steps taking Christmas pictures,” Altman said.

That’s what makes the building an ideal candidate for a marker, Breeden said.

“The chapel is a great example. You drive along the road and see the building and think it has a story,” he said. “There’s only so much we can fit on a marker description, but it gives us an opportunity to share a little bit of that.”

There are eight historical markers on the island that were erected by the Pawleys Island Civic Association in 1993. There are over 1,700 markers in the state, but that was the most erected at one time.

The chapel wasn’t eligible at the time. Markers are only allowed for places at least 50 years old. Its history goes back to 1946, when the Georgetown Ministerial Association decided to provide a place for summer visitors to worship. A Pentecostal Holiness Church in Georgetown was disassembled and rebuilt on the marsh. The first service was June 6, 1948.

That information will be on the marker.

Altman expects the chapel trustees will hold the dedication for the marker on the first Sunday in June, when summer worship resumes.