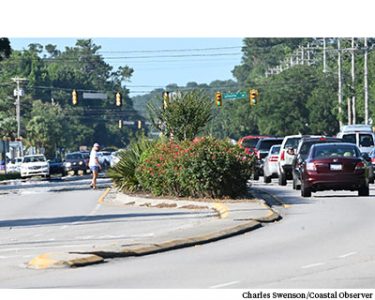 A pedestrian crosses the highway during a break in traffic.

There have been fewer injuries in crashes on Highway 17 in the Pawleys Island business district since construction of a raised median five years ago even as the total number of crashes has increased, according to a study commissioned by the Grand Strand Area Transportation Study.

“It was about the right time for an analysis,” said Mark Hoeweler, executive director of GSATS. “Three years is the minimum.”

The number of “angle crashes,” which are considered the most dangerous, was down 24 percent in the period after the median was completed.

The total number of crashes was up by more than a third in the last four years. Traffic increased by 10 percent.

Hoeweler said the increased crashes were due to the traffic signals. “When you put in a signal, you’re going to see an increase in accidents,” he said.

The analysis didn’t include data from 2015, when the median was under construction. There were 61 crashes that year with 15 injuries.

The raised median between Waverly Road and Martin Luther King Road was first proposed in a 2003 study of the Highway 17 corridor on Waccamaw Neck as a way to keep traffic moving without widening the highway to four lanes. The study is being updated and a raised median for the highway between Waverly Road and the South Causeway is among the recommendations.

The project provoked opposition from some business owners who said restricting left turns would impact their customers and some residents who said more commercial traffic would be forced onto side streets. The debate was rekindled this spring during the GOP primary for County Council District 2.

Council Member Ron Charlton said he was skeptical of the plan from the start, although he voted in 2003 to request that GSATS put the project on its list for funding.

Bob Anderson, who is challenging Charlton, served on council from 2011 to 2014 in District 6. He said he inherited the issue, but supported the median as a safety improvement. Anderson lost his bid for a second term to Steve Goggans, who had led opposition to the median.

Goggans noted the recent safety analysis shows the crash rate increased after the installation of the median more than twice as much as traffic increased.

He said he would like to know more about where the crashes take place, such as at intersections, and whether the vehicles are entering or leaving the highway.

Hoeweler said that data has changed over time, so it may be hard to make comparisons. For instance, state troopers investigating accidents would enter the GPS coordinates after the vehicles were moved from the roadway.

Goggans is concerned that the updated corridor study by AECOM, a global engineering firm with offices in the state, relies too much on restricting left turns. He favors limiting curb cuts along the right side of the highway.

That was a strategy proposed before the median project started but after the state Department of Transportation had closed out the public comment period.

Paying attention to the right side of the highway would also improve safety, Goggans told the corridor study steering committee in a letter earlier this year.

“Accident data shows that the second greatest location or source of accidents are vehicles enter and leaving the highway,” he said.

Although there were more total crashes (213) from 2016 through 2019 than in the four years before the median was built, that number is well below what was projected without the raised median, according to the safety analysis. That difference, 87 fewer crashes in four years, resulted in savings of $12 million, including the economic costs and “monetized pain and suffering,” it states.

“With a construction cost of $2.4 million, the median project benefits have greatly exceeded its cost in just four years,” the study says. “These benefits can be expected to continue in the years ahead.”

Hoeweler also pointed out that the actual number of crashes declined in the last two years even as traffic on the highway has increased.

“It has slowed the rate of increase,” he said of the raised median.

In 2019, there were 45 crashes and eight injuries, including one fatality, in the 1.8-mile section of Highway 17. That was the lowest number of crashes since 2013.