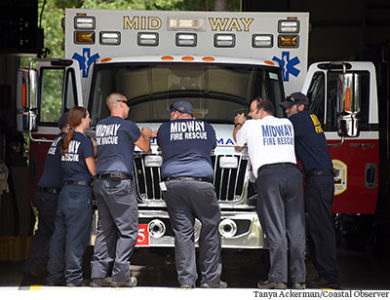 Midway has nine designated EMS workers for four ambulances, and draws on cross-trained firefighters to complete its staffing requirements.

Georgetown County will draw on its reserves to cover about $1.5 million in budget deficits for the coming year. County Council will start early looking for ways to stem the flow of red in for the next budget.

“We expect to have the same type of situation next year,” County Administrator Sel Hemingway said.

But the board of Midway Fire and Rescue is pressing the county to add nine emergency medical workers so it can staff three ambulances around the clock. The department has nine EMS workers now, a staffing level set in 2006.

“We’ve doubled the amount of calls,” Richard Faulk, who chairs the Midway board, said. “The council has to start to take a look at their priorities.”

The county was able to reduce its projected deficits for the 2020 fiscal year by counting anticipated federal reimbursements for a series of storms beginning in 2015. It also counted revenue from the sale of surplus equipment, but like the federal funds those are one-time funds.

County Council last week agreed that pay raises for firefighters and emergency medical workers will be part of a larger discussion about ways to maintain competitive salaries for starting employees as well as long-term staff. “That problem is universal. It’s not unique to the fire service,” Hemingway said.

The county also drew on its reserves to balance the budget last year.

“I realize it’s a tough battle,” Faulk said, but added “the alarms just keep coming in.”

Midway has four ambulances, but draws on firefighters with medical training to staff them. EMS crews are funded through the county general fund, not the separate tax rate that funds Midway fire operations.

Along with growing demand, a state rule that requires some patients be transported to the trauma center at Grand Strand Regional Medical Center rather than county hospitals means ambulance crews are tied up in travel. “Coming back is a huge issue,” Eggiman said, since the vehicles don’t use their lights and sirens.

He understands the budget is tight. “All we can do is convey the need,” he said. Eggiman also welcomed the attention on the pay system.

The budget includes a 2.5 percent cost-of-living raise for county employees. Since those raises are applied to pay scale, not the individual, long term employees say that they earn the same as new employees in the same pay grade.

In Horry County, employees get up to 3 percent in merit pay raises. “Their entry-level salary tends to become stagnant,” Hemingway said. “There’s not a perfect solution.”

Georgetown County once offered a combination of cost-of-living and merit raises. That ended during the Great Recession.

The problem with fire department pay is different from the situation with law enforcement, where starting salaries made it hard to fill vacancies, Council Chairman John Thomas said. “We need to take a look at solving the bigger problem long term.”

Faulk has seen studies before. “I’m tired of studies,” he said.

The Midway board wants the county to create a separate pay scale for first responders.