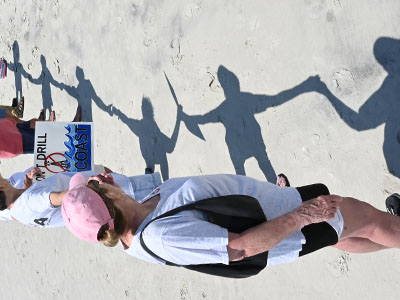 Opponents of drilling joined Hands Across the Sand in 2019.

Opponents of oil and gas production off the South Carolina coast said they have tried to get support from Sen. Lindsey Graham for five years.

But they were skeptical this week about his support for President Trump’s decision to extend a moratorium on leases until 2032.

“My view has always been that offshore drilling, when it comes to South Carolina, should be decided by South Carolinians – the legislature and the governor,” Graham told reporters at an online press conference Wednesday, a day after he joined the president in Florida for the announcement about the moratorium.

“Clearly Sen. Graham doesn’t understand,” said Peg Howell, a leader of Stop Offshore Drilling in the Atlantic. “This is clearly a political maneuver.”

In 2012, Graham introduced a bill to open up the Outer Continental Shelf off South Carolina to oil and gas leases. The bill would have allowed the state to control leases from 10 to 50 miles. No drilling would have been allowed up to 10 miles.

SODA was formed locally to oppose plans to include the area in the federal government’s periodic review of leases.

Since then, the state legislature has adopted measures that prevent the permitting of oil and gas infrastructure along the coast.

Local governments, including the town of Pawleys Island, have joined a suit in federal court trying to block permits that would allow seismic testing for oil and gas. And during that time, Howell said, Graham has not supported the state’s efforts to block offshore drilling.

“I spoke with his staff on July 30. They didn’t expect anything to be happening between now and the election,” Howell said.

She said she was told that Graham’s position on oil and gas had evolved.

“Energy independence has been achieved, and I think that the positives that may exist off our coast are not necessary to our energy needs,” Graham said. “Continuing the moratorium is gong to be beneficial to our coastal communities.”

And he added, “I don’t see a Democratic administration, if there is one, going back on this.”

Howell said it wouldn’t necessarily require a Democrat in the White House to change direction.

If re-elected, Trump and Graham “can change this Nov. 4,” she said.

Even with the moratorium in place, it leaves the issue of seismic testing unresolved. The state also opposes the federal permits issued for the testing, saying that the air gun arrays used to study the geology under the ocean have the potential to damage marine life on which commercial and recreational fisheries depend.

“This action does nothing to protect our coast,” Howell said.

But state Sen. Chip Campsen of Charleston, who led the state effort to ban oil and gas infrastructure, called the moratorium extension, “a welcomed layer of additional protection.”

The withdrawal of the area “prevents consideration of these areas for any leasing for purposes of exploration, development, or production during the 10-year period beginning on July 1, 2022, and ending on June 30, 2032,” according to the president’s memorandum.

“Offshore drilling is a threat to our coastal economy, quality of life and magnificent natural resources,” Campsen said in a statement. “The Lowcountry’s voice was heard loud and clear today in the White House’s 10-year moratorium.”

If Graham really wants to help, he should support a bill passed in the House that would ban offshore drilling permanently, Howell said.

“I think we’re in good shape. I don’t think this administration is going to allow drilling off the coast,” Graham said. “The executive order says that. This is a binding document, a legally binding document.”

Although North Carolina wasn’t included, he expects that it will be added.

Graham said he found out a couple of weeks ago that the president was going to extend the moratorium for Florida.

He spoke with Gov. Henry McMaster and then raised the issue of adding South Carolina while playing golf with President Trump.

“The rest is history,” Graham said.