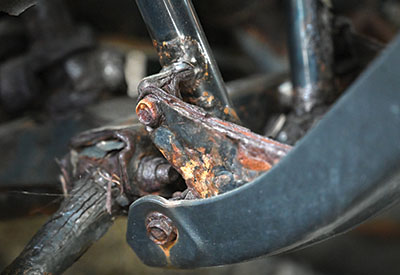 Rust has eaten away at the frame of the police department’s 6-year-old ATV. Last week, the brakes failed.

A partnership with the Army Corps of Engineers is worth tens of millions of dollars to the town of Pawleys Island, officials say, but they are looking at tens of thousands of dollars in legal fees to make that possible. And the short-term cost could be higher as a Circuit Court judge considers a request for legal fees from property owners challenging the town’s efforts to condemn easements for beach renourishment.

At the center of the financial uncertainty is a 2014 Honda all-terrain vehicle that sits under Town Hall. Its brakes locked up when a police officer tried to take it out to patrol the beach last week.

Town Council approved $13,280 in December to replace the ATV with a larger two-seat vehicle. It delayed ordering the replacement while debating how, and if, the town should patrol the beach.

This week, Police Chief Mike Fanning told the council it needed to make a decision if the town was going to have an ATV before Memorial Day. In a 3-2 vote, the council decided to order a smaller single-seat ATV for $7,032.

Although the ATV was in the budget, legal fees related to suits over the condemnations were not. Neither was a claim for nearly $150,000 in legal fees that came after a judge quashed the first condemnation attempt. Barry Stanton, an attorney who is representing himself and two other property owners, told the court earlier this month that he is preparing an update to his fee request, which was first presented in February.

Stanton, Frank Beattie and Sunset Lodge LLC filed suit in July to overturn the condemnation of easements that the town says are required by the Corps of Engineers. The town completed a $14.8 million renourishment project in March 2020 funded with local and state funds. The 1.4 miles of beach on the southern end of the island has enough public access to qualify for federal funding to repair severe erosion damage and conduct future renourishment. To qualify, the town needs easements from 113 property owners. It has 110.

“This is why we went after the easements,” Council Member Rocky Holliday said. “We’re talking about tens of millions of dollars.”

The Corps agreed to erect sand fence and plant beach grass on the south end as part of the 2020 project. That work is due to go out to bid soon, Town Administrator Ryan Fabbri said.

It isn’t the work itself, but the status of the larger project as a federal project that is important. “Once you’re in that club” the Corps will pay to repair storm damage, he said. “They put 100 percent of the sand back from when you first renourished it.”

Although the Corps will skip the three lots without easements for fencing and plants, they have to be part of any future sand placement, Fabbri said.

Until the town has the easements “we’re not considered a completed project,” he added.

The property owners have said in filings and in court hearings that they offered the town easements, though not in the same format sought by the Corps. They claim that the required easements will allow the public to use their decks and outside showers.

The owners also claim that they have been defamed by the town’s portrayal of them as holding out against a project that will benefit the island. Stanton told the court at a hearing this month that the prospect of future federal aid is only speculative.

Holliday suggested Mayor Brian Henry post a video to let property owners know the importance of the partnership with the Corps of Engineers.

Fabbri urged the council at a meeting this week to limit its public discussion of the easements because of the pending litigation.

Will Dillard, who is representing the town, told the court he expects that the town will try again to condemn the easements. Both sides are due to submit proposed orders this week in a second set of suits that the owners filed after the town tried to revise its initial condemnation notice to correct procedural defects.

Stanton hinted to the court that there had been talk of a settlement.

That’s why Holliday and Council Member Guerry Green were opposed to spending money on an ATV for the police department. Both have also said the beach patrol is a disruption.

With those kind of unplanned expenses, a business would look at places to defer spending, Green said.

Fanning questioned whether a business would defer spending on safety.

“We’re talking about safety of people on the beach; swimmers, missing children, that type of thing,” he said. “I need to know that I’m doing the best I can to make people safe, and this is the tool I need to do it.”

He proposed the smaller ATV.

Holliday asked if there were other places to cut spending.

Fanning said the department had already cut one full-time officer to allow the town to start rebuilding its cash reserve for future beach projects. “We’ve done our part as far as stretching out that budget,” he said.

“There’s the money question. There’s the philosophy question,” Henry said, asking Fanning how important an ATV is to the police department.

“There’s no way we can patrol the beach, especially on the weekends, without an ATV,” Fanning said. If some people find that a disruption to their beach time, he added, “I apologize.”

Council Members Ashley Carter and Sarah Zimmerman said it is important for the police to have a presence on the beach.

Zimmerman recalled a resident questioning the town’s license plate cameras, but said he changed his mind after they helped catch a sex offender.

“You very rarely as council members are going to make decisions that could be, eventually, a life or death decision, and this is one of them,” Fabbri said. “You’re really going to hold off $6,000? Because of what? What are you saving for?”

Henry said the less expensive ATV was a good compromise and joined Carter and Zimmerman in approving the purchase.