Initiative will collect data along with estuary’s litter – Coastal Observer

Initiative will collect data along with estuary’s litter 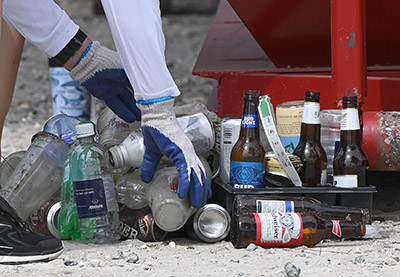 The app will help identify trends and locations for litter.

On a Sunday morning in November, Sandra Bundy spent half an hour picking up trash along the Marshwalk. She collected five plastic bottles (including Hunt’s Ketchup), seven aluminum beer cans (all different brands), a plastic shopping bag and four pieces of styrofoam.

It was one of nine cleanups that Bundy documented with a citizen science app that she had downloaded on her phone. It allowed her to photograph her haul, note that the debris was washed up by a king tide and lament that more trash was just out of reach.

Next week, Bundy will launch an initiative to encourage more people to download the app as part of an effort to clean up around Murrells Inlet and provide data about the type of litter and where it is found.

The app was developed for the South Carolina Aquarium with an eye toward tracking the growing volume of plastic waste. The data goes into the Litter-Free Digital Journal maintained by the aquarium that includes over 7,200 entries by more than 1,700 users.

“I just think that data is very important,” Bundy said. “If you don’t know what’s happening, where it’s happening, you can’t do anything about it.”

After her November cleanup along the Marshwalk, Bundy thought about asking the county if she could place dip nets along the route to encourage people to fish out litter from the creek.

Instead, she created Our Marsh Counts. It will start Feb. 12 at 9:45 a.m. at Morse Park Landing. The cleanup will continue until noon and include the public boat landing, the oyster landing, the Marshwalk and the Jetty Walk.

Partners include the county, the S.C. Aquarium, Murrells Inlet 2020 and Coastal Carolina University.

People will be able to use the aquarium’s citizen science app, but Kelly Thorvalson, the conservation programs manager at the aquarium, said they realize not everyone will want to use it. At large cleanups, the aquarium has also used paper records, much like the annual Beach Sweep organized by the S.C. Sea Grant.

But over time, Thorvalson hopes the initiative gets more people collecting data as well as trash.

“If you don’t know what’s littering the community, it’s hard to take action,” she said.

Communities that have used the app for years are able to identify trends about the mix of litter, its location and its timing.

“The data has been instrumental in many of the single-use plastic bag bans along the coast,” Thorvalson said. “It’s also useful in monitoring their effectiveness.”

Georgetown County also plans to collect data on litter as part of its recently-adopted litter action plan. The county Environmental Services division considered developing its own app, but decided to collect the data through its asset management system, said Maureen Mulligan, the county environmentalist.

Organizers of a cleanup along Highway 17 south of Pawleys Island scheduled for Feb. 13 have also joined the S.C. Aquarium litter database. There is concern that data collection can add to the time volunteers spend at a cleanup, but Thorvalson said it’s important to realize that there is a larger goal.

“You have to have the data,” she said. “Picking up litter doesn’t help develop solutions.”

Bundy hopes that the app will serve both purposes by encouraging people to pick up trash and letting them record what they gather. Next weekend’s event isn’t a one-time cleanup, but a kickoff for an ongoing effort, she said.

“This isn’t a replacement for any cleanup,” Bundy said.  “It isn’t somebody else’s problem, it’s all our problem.”