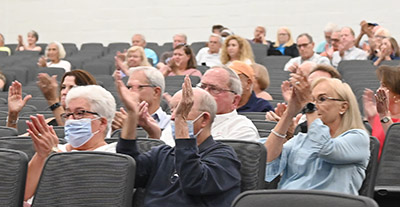 Opponents applaud the defeat of the rezoning request in May 2021.

A lawsuit filed in U.S. District Court claims Georgetown County failed to follow its comprehensive plan when it denied zoning approval for an affordable-housing development outside Georgetown last year.

The suit was brought by the state and county chapters of the NAACP and by the company that planned to build and operate the project, FourSix Development. It follows two suits brought this year by residents and citizens groups on Waccamaw Neck challenging the county’s approval of developments that the plaintiffs claim also violate the comprehensive plan by increasing density.

This week’s suit claims that the county violated the federal Fair Housing Act as well as the Constitution.

FourSix  planned to build 90 units of affordable housing on property off Highway 701 that was zoned for a new facility for Tidelands Health. Tidelands sought a change to the “planned development” zoning to allow multi-family residential units on 16 acres.

County Council failed to pass the change on third reading because the vote was 3-3. Council Chairman Louis Morant recused himself because his wife sits on the Tidelands board, which opponents said was a conflict of interest.

The federal suit cites the county’s approval later that year of a rezoning at Pawleys Island. That approval was contrary to the comprehensive plan while the Porter’s Landing project complied with the plan, according to the court filing.

Based on the county’s demographics, most of the residents of Porter’s Landing would be Black, according to the suit.

Statements by council members and opponents “demonstrate that race, including the race of prospective residents of the Porter’s Landing site, was a motivating factor in  Defendants’ decision to deny the zoning change,” according to the suit.

“Zoning  decisions like the Georgetown County Council’s rejection of Porter’s Landing are quintessential violations of the Fair Housing Act,” said Malcolm Peyton-Cook, senior counsel for the Lawyers’ Committee for Civil Rights, one of the lawyers representing the plaintiffs.

The suit seeks to enjoin the county from interfering with the Porter’s Landing development and to declare that its policies and practices “are discriminatory on the basis of race.”

It also asks for the federal court to supervise the county’s efforts to promote the development of affordable housing.