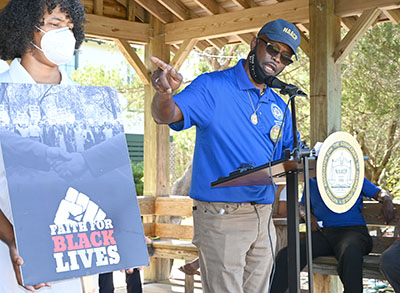 Marvin Neal, president of the local NAACP chapter, said protests will continue if the mayor does not resign.

The local chapter of the NAACP plans to march on Pawleys Island this weekend to raise pressure on the town’s mayor to resign over a social media post that the group has condemned as racist.

“This wave that is rising up will overwhelm the town of Pawleys Island, the community of Pawleys Island, and will shake it from street to street, rafter to rafter, like you’ve never seen before,” said Marilyn Hemingway, a vice president of the local chapter.

That wave will be coming in peace, she said at a press conference in the island’s Nature Park last week. Hemingway expects “dozens if not hundreds” of people to march.

The organization called for Mayor Brian Henry to resign following a Facebook post in August that linked the shooting deaths of two people in Georgetown to the social justice protests in cities around the country. A Berkeley County man who was arrested for the shootings is Black. The victims were white.

The post called Black Lives Matter a “terror organization” and used a vulgarity to refer to the suspect in the shooting.

Henry apologized for the post, saying he knew the family of the victims and was upset. He has since said he plans to create a foundation in the name of a former employee, Vetrella Brown, whose image was on the packaging of Palmetto Cheese, the brand created by Henry and his wife, Sassy. It will work to improve race relations and improve education.

The Henrys met with NAACP members last month, a meeting requested by the mayor, said Marvin Neal, president of the local chapter. The talk didn’t go beyond what Brian Henry said at his own press conference last month.

“All his conversation leads back to saving his business,” Neal said.

Henry declined to comment, but has said he does not plan to resign.

Last week, Neal renewed his call for Henry to resign. “I don’t have hate for Brian, but I don’t like what he did,” Neal said.

He was joined by Brenda Murphy, the state NAACP president, who said she supports the local effort.

“Marvin could have taken this further,” she said. “He’s been restrained.”

Saturday’s march will start at 2 p.m. from the back of Publix, cross to the island and onto the beach at First Street, said Police Chief Mike Fanning. Marchers plan to end up at the Sea View Inn, which is Henry’s voting address.

The protest had planned to start in the Nature Park, but Administrator Ryan Fabbri said the park was booked on Saturday. A property owner’s daughter is planning a family Frisbee tournament, he said.

It is the third time the park has been booked in his seven years as administrator, Fabbri said.

Neal also said the marchers who support the NAACP will be peaceful.

“Hate can’t win. That is the problem we have now. People are so hateful,” he said. “And that’s on both sides, Black and white.”