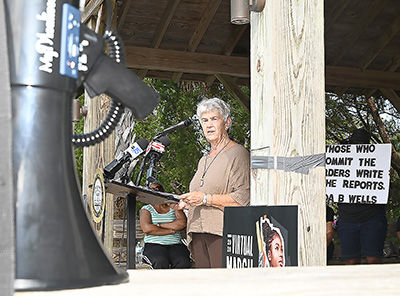 Karen Yaniga, a property owner in the town, addresses the rally outside Town Hall.

The local chapter of the NAACP this week turned up the pressure on Mayor Brian Henry to resign following a racially charged Facebook post last month. A protest outside Town Hall drew about 60 people ahead of Town Council’s monthly meeting, which was held online, and organizers promised to return every week.

The NAACP threatened a legal challenge to Henry’s residency, renewing an issue from last year’s town election. Henry changed his residency from a house on the mainland to the Sea View Inn in order to challenge Jimmy Braswell, who was seeking a second term as mayor.

“My statement to Mayor Henry today is to resign now,” said Marvin Neal, NAACP chapter president. “We will continue to come until he resigns or the courts remove him. That’s a choice he has.”

The NAACP successfully challenged the residency of Georgetown County Council Member Austin Beard last year. The county Board of Voter Registration and Elections ruled unanimously that Beard was not a resident of District 5, where he had rented a house, but admitted he had never lived in it. Beard resigned.

Henry said he has no plans to resign.

“The island is the reason we moved here 19 years ago, and I recently took an oath to protect its future,” he said. “I plan to honor that commitment.”

It seeks signatures from 15 percent of the registered voters, a reference to state law that allows voters in municipalities to petition for the passage of ordinances. If the council fails to act, the measure goes to a referendum.

But Thomas’ petition doesn’t include an ordinance. That state law allows Town Council to remove a member who is not qualified to hold office under the law, who violates the statutes or who is convicted of a crime.

Henry and his wife, Sassy, were among 42 new voters who registered on the island before last year’s election. County property records showed that they also changed the tax assessment on their home on the mainland to remove the residential discount.

The county elections board denied a protest filed after the voting that Henry was not a qualified voter.

The town of Pawleys Island doesn’t have a municipal property tax.

The Henrys own Palmetto Cheese, the top-selling national brand of pimento cheese. The business has also come under fire since the mayor posted a Facebook message that linked the arrest of a Black man in the fatal shooting of two white people following a traffic accident outside Georgetown to violent protests over racial injustice.

“Rise up America. This BLM and Antifa movement must be treated like the terror organizations that they are,” he wrote.

Henry deleted the post and said its angry tone was due to the fact that he knew the victims’ family.

“I was horrified,” Karen Yaniga, a property owner in the town and former member of its Board of Zoning Appeals, said of the reference to Black Lives Matter. “It’s a movement of advocacy.”

Ruby West, who lives on the Pawleys mainland, said she supports Black Lives Matter and asked if that makes her, along with her husband and son, a terrorist.

“The entire Southeast is talking about Pawleys, not because of our beaches or our shabby-chic charm or our hammocks. Instead, it’s because of our mayor’s racist rant on Facebook,” West said. “I’m embarrassed. I don’t want to see our community’s reputation mixed up in his personal reputation.”

By focusing on the race of the people involved in the shooting, “he decided to take his grief to a different level,” said Steve Williams, a retired educator and a local NAACP official. “That is why we are here.”

Yaniga agreed. “That is racism, my friends,” she told the audience gathered around the pavilion in the Pawleys Island Nature Park. “We need to speak out against racism when and whenever it exists.”

Henry issued an apology and pledged to start a foundation in honor of the late Vertrella Brown, a cook at the Sea View Inn who was featured on the Palmetto Cheese label and was said to have added the “soul” that is part of the brand’s slogan.

That effort is under way, Henry said, starting with an endowment that will focus on building unity in the community.

“It will take time, but it has my focus and attention,” Henry said.

There have been calls for a boycott of the cheese. Neal said the NAACP is not part of that.

“I’m not trying to ruin the man’s business,” he said after the rally. “I’ve got two containers in my refrigerator. I like the cheese.”

But Neal said during the protest that he had no tolerance for Henry’s “racist comments.”

At a press conference days after the post, Neal stopped short of calling Henry himself a racist. They served together on the Georgetown County Planning Commission.

This week Neal said he had reconsidered.

Henry and Neal talked before the NAACP’s first rally at Town Hall in August. They have not talked since.

“If there was a conversation, I would share it with you,” Henry said. “I have made attempts and received no return calls. During all conflicts, it starts and ends with conversation.”

Neal said at the rally that “silence does not give consent in these circumstances, so when we are silent, when I am silent, he really has a problem.”

Afterward, he said that there was a time for conversation before the NAACP issued its demand for Henry’s resignation. That time has now passed, Neal said.