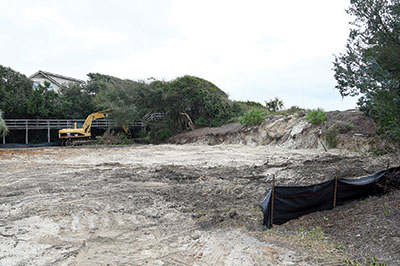 A house on the property was demolished to make way for two others.

The Planning Commission has denied an appeal from a North Litchfield property owner who wanted Georgetown County to block a neighbor’s plans to create two lots out of an acre of oceanfront property.

“It’s a first for us,” said Boyd Johnson, the county planning director. “It’s not a zoning ordinance appeal, it’s the land development regulations.”

While most appeals of staff decisions go the the Board of Zoning Appeals, state law requires appeals of plats to go the the commission.

Shoestring Retreat, a limited partnership based in Tennessee, bought the lot at the end of Summertime Drive in September for $1.7 million after the previous owner received county approval to subdivide the lot. Holly McManus, a partner in the LLC with her husband Robert, received a permit in October to demolish the existing house.

The next day, MAC Coastal Properties, which owns timeshare interests in an adjacent lot, filed an appeal of the staff’s decision to approve the subdivision. It claimed the previous owner, Katherine Haun, failed to disclose deed restrictions that prevent the lot from being subdivided.

The appeal cited state law that requires the disclosure of restrictive covenants and bars planners from issuing permits that conflict with the restrictions.

“The decision of staff in approving the Shoestring subdivision plat is contrary to law and the plan should not have been approved,” the appeal stated.

In addition to violating the deed restriction, the appeal claims that houses built on the new lots will require a variance from the county’s building setbacks.

MAC Coastal Properties, represented by Tobias Ward Jr. of Columbia, wanted the Planning Commission to overturn the staff decision and prevent development of the lots pending the outcome of the appeal.

Shoestring Retreat, represented by Dan Stacy, argued that the deed restrictions that were placed on the property by the original developers of North Litchfield are no longer valid. Two documents recorded in the 1970s specifically released prior owners from the restrictions, Stacy said.

Also, Shoestring argued that the restrictions were only enforceable by the original developer and could not be enforced by other property owners.

The deed restrictions, included in deeds from the Boyle family, are not the same as those placed on other lots in the neighborhood by North Litchfield Beach Inc. The right to enforce those restrictions was granted to the Litchfield Beaches Property Owners Association.

The association president, Cindy Kerr, said in a letter to the commission that she met with Stacy in April and, while acknowledging that the association could not enforce the restrictions, said they needed approval from the Boyle family. The association opposes the subdivision.

Because the restrictions are no longer valid, Haun, the previous owner, was “entirely and unequivocally accurate” when she told the county there were none that affected the property, Stacy argued.

Even if there were, MAC Coastal Properties has no legal standing to enforce the deed restrictions, according to Stacy.

The company, whose president is Charles Salley, “simply asserts that the mere existence of such restrictive covenants, without giving any consideration to the subsequent releases … requires the Planning Commission to take the extraordinary step of inserting itself in a private dispute,” Shoestring stated in its reply to the appeal.

The planning staff asked the commission to uphold its decision. It relied on Haun’s statement that no restrictions applied to the property and state law does not require the staff to search records to confirm her claim, according to the staff.

As to the claim that houses on the new lots could not comply with building setbacks, the staff said the lots would have 3,784 and 3,650 square feet of buildable area after sand dunes are deducted from the total lot area, those “are sufficient for single family development,” the staff says. The lots meet the area’s zoning requirements.

The Planning Commission’s decision can be appealed to Circuit Court, Johnson said. He added that the county would not issue building permits for the lots in light of the dispute unless he gets a legal opinion to do so.