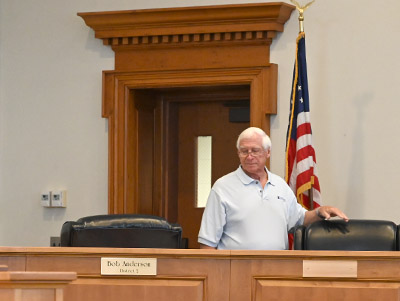 A day later, the council voted 4-1 to move forward with a zoning change that would allow another 90 townhouses in the area. Council Member Bob Anderson  cast the lone dissenting vote.

“Remember, we’re talking about the law here,” Anderson told his colleagues. “The law was not followed in 2010.”

The plaintiffs in the suit also claim that Georgetown County didn’t follow the law in approving site plans for townhouses on Petigru Drive and Parkersville Road. Those projects didn’t require a zoning change.

But the suit claims that the county’s approval process violates state law.

The county requires that multifamily developments with more than 10 units be reviewed by the Planning Commission for compliance with development regulations. The commission makes a recommendation. The council makes the final decision.

The commission voted 3-2 to recommend denial. The council voted 5-1 to approve, with Anderson opposed.

State law “specifically confers authority for making decisions to approve or disapprove on the Planning Commission or designated staff,” the suit states.

The other plaintiffs are the Parkersville Planning and Development Alliance, Keep It Green and Preserve Murrells Inlet.

“The Planning Act grants no authority to County Council to approve or disapprove a land development application,” Person said in her filing.

She asks the Circuit Court for a declaratory judgment that the commission’s denial was final and voiding the county’s current process for site plan review.

If the court disagrees, the suit asks the court to overturn the approvals because they would place high density development in areas designated as medium density in the county’s future land-use maps. The maps are part of the county’s comprehensive plan.

The property proposed for the townhouses is zoned “general residential,” which allows more than five units an acre, which the county considers high density. The projects would have 6.8 and 8.3 units an acre.

Person also represented area property owners and citizens groups in opposing the rezoning of 14.5 acres on Petigru Drive that the county Economic Development Alliance bought for a technology park. The alliance now wants to sell the property, which is zoned as a “planned development” that allows a mix of office, warehouse and commercial space.

The Planning Commission voted 5-0 to recommend denial of an amendment to the zoning that would allow multifamily dwellings. It cited the future land-use designation of the property as commercial.

Person argued that the amendment was improper because the “planned development” zoning should have expired when no work began within two years of its approval in 2008. Instead, the zoning was extended in 2012 and amended to allow the tech park in 2015.

“This is, I believe, the most flawed, most legally flawed, proposal I’ve seen,” Person told the council.

“When is enough enough?” Mary Beth Klein, a member of Keep It Green, asked the council. “We’re not looking at the cumulative effect.”

Dan Stacy, who represents the alliance in the rezoning, said the unnamed developer has proposed renting 30 percent of the townhouses at below market rates.  The original proposal was for 20 percent.

Stacy cited the goal of the housing element of the comprehensive plan for workforce housing and said the project would help meet that. “This is a project that will pay for itself,” he said.

Anderson moved to table a vote to change the future-land use map to allow the townhouses.   Because no extension to the original zoning was approved “all the history from that date is flawed,” he said.

“Our original goal for this property was economic development,” he said. “This also meets the goals of the housing part of our comprehensive plan.”

Anderson also moved to table the second of three required readings of an ordinance amending the zoning. He got the same result.