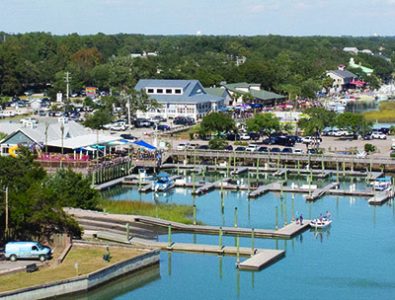 Commercial buildings along Business 17 would not longer be able to use floodproofing as an alternative to elevating.

New building codes that local governments must adopt by Jan. 1 will extend the construction standards required along the beachfront to be used for buildings farther inland, raising costs and making existing structures nonconforming, officials say.

“This will greatly impact businesses along Business 17 in Murrells Inlet. It will render a bunch of them nonconforming,” County Council Member Steve Goggans said.

Georgetown County Council gave the second of three readings to the updates this month, but only after learning that the new codes are more stringent than the flood regulations required by the Federal Emergency Management Agency.

This issue is further complicated by the fact that the federal Flood Insurance Rate Maps for the county that were drawn in 2015 are not due to be implemented until May 2023. The initial delay was due to an appeal of flood maps by Horry County. FEMA said the Georgetown County maps couldn’t be approved until the Horry maps were resolved. But once that happened, the agency found problems on 11 of the 115 map panels that cover Georgetown County. FEMA started the public notice process again. That was over a year ago.

Georgetown is the only county in the state without current flood maps.

It’s an area subject to flooding from hurricanes, but with less impact from wave damage than the beachfront, which is designated the V zone. FEMA encourages local government to enforce V zone construction standards in the Coastal A area, but doesn’t make it mandatory.

The new building codes do.

For residential buildings, that means the elevation required to meet the FEMA regulations will be measured from the lowest horizontal structural member rather than the finished floor. It also means the enclosed area under houses will be limited to 299 square feet. Those enclosures will be required to have breakaway walls.

The code change for commercial structures in the Coastal A area means they will have to be elevated rather than using floodproofing measures to comply, Elliott said.
“A business in that Coastal A zone that has to adhere to VE zone standards loses the ability to floodproof because VE construction standards don’t allow floodproofing,” he said.

The impact is not confined to the Waccamaw Neck, Elliott added. The Coastal A designation extends to Wedgefield outside Georgetown and plantation tracts along the Pee Dee River.

If existing properties sustain damage equal to 50 percent of their value, or if the owners do renovations that exceed that amount, they will need to be brought into compliance with the new standards, “which most people think of as oceanfront construction,” Elliott said.

He raised the issue with the Building Codes Council, but was rebuffed.

“It seems the state is taking the position that ‘you had your chance to get these amendments in,’  ” Elliott said.

But the codes council made an emergency amendment last month that removed a requirement in the new code that required gender-neutral bathrooms in public buildings.

“There’d be some hardship in terms of elevating and not being allowed to floodproof, which is a common practice in other parts of the state,” particularly downtown Charleston, Goggans said. “This slipped by the legislature. This slipped by us.”

This was Goggans’ last meeting after serving two terms on council. He urged his soon-to-be-former colleagues to contact the legislative delegation about getting an amendment to the new codes.

“Even though my time has passed, I’m happy to assist,” he said.

An amendment  “would be beneficial to counties all along the coast,” Elliott said.

Pawleys Island Town Council has not voted on the new codes. The town will start using a private firm, SAFE Built, to handle its building permits on Jan. 1. The county had been handling those under contract.

State Rep. Lee Hewitt said he was not aware of the problem. He regularly receives questions from constituents about the updated FEMA maps, he said.

Told about Elliott’s concerns, Hewitt said he could think of other complications for businesses in Murrells Inlet. For instance, if commercial buildings have to be raised, it will be hard for them to comply with the Americans with Disabilities Act.

He suggested that the county officials contact their peers along the coast to compile their concerns.

Elliott talked with colleagues in Myrtle Beach and Horry County. “They were both unaware that more restrictive measures were in the code,” he said.

County Council Member Raymond Newton asked what would happen if the county doesn’t adopt the codes.

“We don’t have a choice,” Elliott said. “The ones we’re talking about are mandatory.”

“With the housing problem we have, even on the Waccamaw Neck, by passing this, we’re just driving up the cost even higher for these middle-wage workers to live in that area,” Newton said.

Jay Watson, the county attorney, said he wasn’t aware of the issue before the council meeting. He suggested the council pass second reading while he looked into it.

“There are just too many different moving parts here,” Watson said. “I think all the concerns you are raising are very valid.”

He added that he was also interested to figure out what impact there would be on insurance if the county failed to adopt the new codes.

“And the majority of our contractors know this monster is sitting on their doorstep?” Newton asked.